No Justice! No Peace! 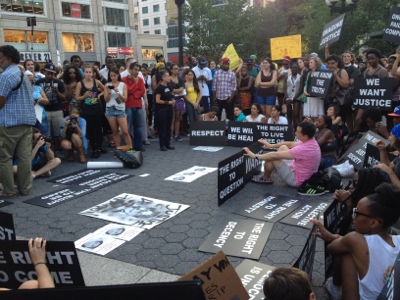 Union Square, NYC
A day after hearing that Zimmerman was acquitted of all charges, with a heavy heart, I went down to 14th St. to join the rally/march. I was way behind so I caught a cab to meet my friends on 34th St. The cab driver didnt even know about the Trayvon Martin trial at all! I told him everything and answered all of his questions. He was so upset. His exact words were, "but why isn't Zimmerman guilty?" 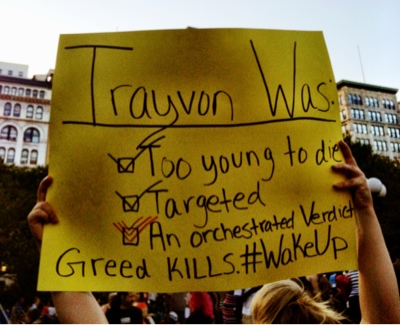 I felt like it was meant for me to be in that cab, just to enlighten him. I explained to him that we live in a country full of corruption and greed, where mere facts that should lead to fair consequences get ignored. These same facts that were given in the Trayvon Martin case were ignored because of race and greedy politicians, in my humble opinion. 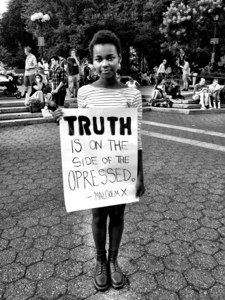 @brooklynwaste in the photo above.
When I finally got to the march, I found myself leading a chant yelling, "NO JUSTICE!" while the crowd answerd, "NO PEACE!" We chanted all the way down to 42nd, where we sat in the middle of the street. Yes, we sat down on the ground, in the middle of Time Square screaming, "WHO'S STREETS? OUR STREETS!" 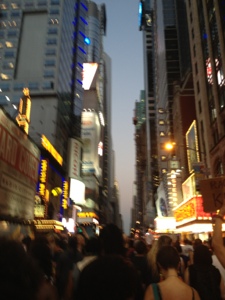 Times Square, NYC
It was beyond amazing to be amongst men and women of all ages, ethnicities, and sexual orientations fighting for the same thing- justice for Trayvon. 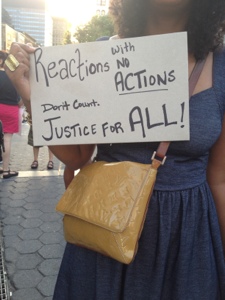 Not only were we protesting for justice for the Trayvons of the past, present, and future--we were demanding a change for our entire human race. We, the people, are tired of this flawed justice system! Enough is enough! 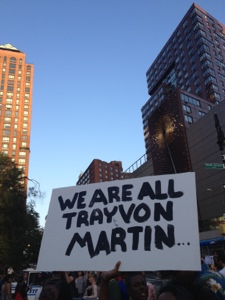 I do believe justice will be served. What people don't realize is that justice doesn't come from the courtroom, it comes from our Creator. He will have the last say in all of this. 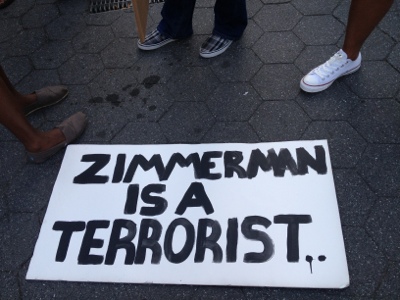 When Zimmerman is finally sentenced appropriately, we will all be victorious. We will show the world the power of the people!
Peace, peace, and peace,
V