Day 11: Somebody Blew Up America


Who killed Malcolm, Kennedy & his Brother


Who killed Dr King, Who would want such a thing?
Are they linked to the murder of Lincoln?

Who killed Huey Newton, Fred Hampton,
Medgar Evers, Mikey Smith, Walter Rodney,
Was it the ones who tried to poison Fidel
Who tried to keep the Vietnamese Oppressed

Who put a price on Lenin's head

Who put the Jews in ovens,
and who helped them do it
Who said "America First"
and ok'd the yellow stars

Who killed Rosa Luxembourg, Liebneckt
Who murdered the Rosenbergs
And all the good people iced,
tortured, assassinated, vanished

Who blew up the Maine
& started the Spanish American War
Who got Sharon back in Power
Who backed Batista, Hitler, Bilbo,
Chiang kai Chek

Who decided Affirmative Action had to go
Reconstruction, The New Deal,
The New Frontier, The Great Society,

Who overthrew Nkrumah, Bishop,
Who poison Robeson,
who try to put DuBois in Jail
Who frame Rap Jamil al Amin, Who frame the Rosenbergs,
Garvey,
The Scottsboro Boys,
The Hollywood Ten

Who set the Reichstag Fire

Who knew the World Trade Center was gonna get bombed
Who told 4000 Israeli workers at the Twin Towers
To stay home that day
Why did Sharon stay away?

Who make money from war

I have never posted anything on my blog that wasn't written in my own words. However, tonight, I wanted to feature an NPR article. I feel like the content of the article is already written eloquently enough.

So, if you're interested in learning more about Amiri Bakara, read below. Honestly speaking, it's a must read if you seriously do not know anything about this man or the controversy behind this poem.

The poem had immediate consequences. Baraka was reviled even by former fans, and his post as the official state poet laureate of New Jersey was dissolved. A few years later, the host of the NPR show News and Notes pressed him about the incident, asking if he had any regrets.

Over his life, Amiri Baraka would express an extremely broad range of beliefs — some offensive, some achingly beautiful. He was born in 1934, in Newark, N.J., as Everett LeRoi Jones. As a child, he was transfixed by poetry and music. He remembered the passing of musician Miles Davis for NPR, saying he wanted to be just like Davis as a teenager:

I wanted to look like that too — that green shirt and rolled up sleeves on Milestones ... always wanted to look like that. And be able to play "On Green Dolphin Street" or "Autumn Leaves" ... That gorgeous chilling sweet sound. That's the music you wanted playing when you was coming into a joint, or just looking up at the sky with your baby by your side, that mixture of America and them changes, them blue African magic chants.

As a young man, the writer was part of New York's then-mostly white Bohemian community. He hung out with Allen Ginsburg and Jack Kerouac — and wrote a book called Blues People that changed people's ideas about the importance of African American culture, says scholar Kumozie Woodard.

"I think the Blues People might be his signature work. And that introduced jazz studies to the American academy," Woodard says.

Then, in 1964, the writer still known as LeRoi Jones wrote a play, The Dutchman, which won a prestigious Obie award and established the playwright as a literary star. It's set on a subway train, where a beautiful white woman strikes up a conversation with a young black man — and begins to tease him mercilessly. "You look like you live in New Jersey with your parents and are trying to grow a beard. That's what. You look like you've been reading Chinese poetry," she says.

But the teases become taunts, and the interaction grows ugly. Eventually, she stabs him in the heart. The play, said critics, expressed deep hostility towards women — a charge that followed the playwright for much of his life. After the murder of Malcolm X, he left his white wife and two daughters to live by radical black nationalist ideals.

In the '60s, after Malcolm's death, black artists met and decided we were gonna move into Harlem and bring our art, the most advanced art by black artists, into the community.

The Black Arts movement was a basically a counterpart to Black Power, and Baraka wrote a number of books now seen as foundational for a certain kind of black aesthetic and cultural identity. He converted to Islam, changed his name and in the 1970s, turned towards Marxism. His work would always emphasize social and political issues:

The people's struggle influences art, and the most sensitive artists pick that up and reflect that.

Baraka's work galvanized generations of younger artists, even as his stridency alienated him from the mainstream. But he managed to work in both worlds. He was a full professor for decades at SUNY Stony Brook, and he was recognized by the Guggenheim Foundation and the National Endowment for the Arts. At the same time, he ran a community arts center in Newark with his second wife. Professor Kumozie Woodard says all these roles — teacher, activist, artist, leader — came together as soon as you walked into Baraka's front door.

"One time I came to his house and there was all this noise downstairs, and I asked him what it was, and he said it was a group of junior high school students who had a jazz history class downstairs," Woodard says. "And then I heard noise upstairs, and I said, 'What's that?" and he said, 'Well, the kids have taken over my office, and they have a newspaper.' "

In Baraka's house — and throughout his life — the Black Arts Movement never stopped. 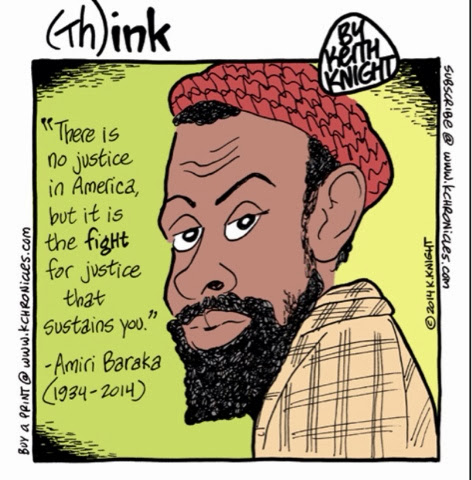