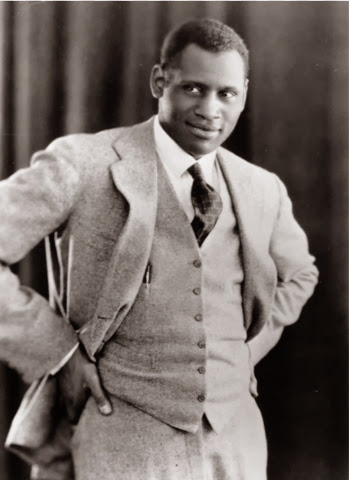 1. His parents were former slaves. His mother died in a fire when he was 6.

2. Despite the hardships he faced growing up, he was only 17 when he became the 3rd African American to earn a full scholarship to Rutgers University. He graduated as the valedictorian of his class.

3.  He earned a second degree in Law from Columbia University in only 3 years. He played professional football and taught Latin classes on the weekends to pay his tuition. He was very articulate and spoke many different languages.

4. He was a lawyer for a short period of time but left his firm because of the harsh racism that he faced from other members within the company.

5. He moved to London with his wife and children, where they lived for over a decade, allowing Robeson to create a buzz as an actor and singer. It was in London where he became famous for his song, Ol' Man River.

6. Russia was known to be his favorite country to travel to as he loved their rich culture.

7. Upon returning to the states, he received many accolades for his role in Othello. He also sung for soldiers who fought in WWII. However, because of his off-stage presence as an activist against racial injustices, in 1950, he was black-listed by the government. They revoked his passport and prevented him from traveling internationally for 8 years. This happened to many black artist during what is known as the McCarthy Era. 8. When his passport was reinstated, he traveled the world again and received more accolades but unfortunately, he suffered from severe depression.

10. Paul Robeson's legacy was recently celebrated as he was inducted into the College Football Hall of Fame. In addition, Criterion recently released: Paul Robeson - Portraits of An Artists, a set of his films and music.

To discover that he was banned from traveling for eight years, just because he spoke against the harsh injustices that his people were facing truly saddens my heart.

Then, I think about the fact that there are so many of us walking around with our heads down, complaining, and finding new reasons to be grumpy and aggravated. How dare we? How dare we not be happy... just to be alive.. just to be! So many of our ancestors, like Paul Robeson, lost their freedom to do what they love so that we could have our freedom today.

It is totally understandable to learn that he grew depressed. They took away his ability to act, sing, and travel. But what has anyone taken from you?
Nothing.

So live every single day in the name of Paul Robeson.
Be free, travel, sing, and educate yourself!