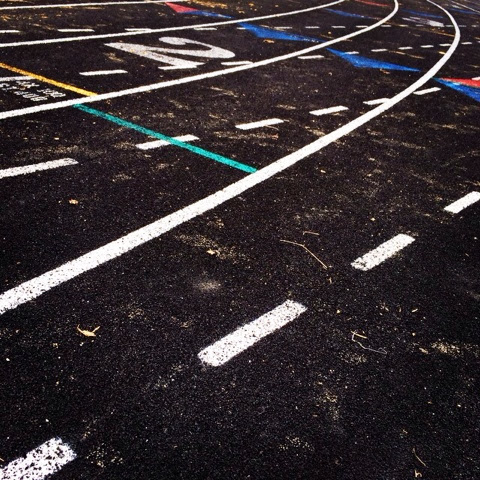 The official hashtag for the challenge is no hashtag. I want everyone to complete this month's challenge for yourselves, not for the gram!

Day 2 of the challenge is a morning run! I challenged myself extra hard by running outside! I HATE RUNNING OUTSIDE! But I did it anyways because I wanted stretch my own comfort zone and I honestly feel better than ever! I'm ready for an amazing week!

As I ran, I meditated on the word running, itself. I have been called a runner in life. And to be honest, those that called me a runner had every right to... I used to do anything possible to avoid facing issues that were really tough for me to grapple with, but over the years, I've learned that if I run, all I am doing is prolonging the issue. Because it doesn't go away, it's only gets worse.
It's hard to talk about this without telling you what I was running from or what I have been accused of running from.. So let me give you a little background knowledge ... The number one monster in my life has always been my family problems... I have been accused of running from those issues as well as from love ...oh love .. Blah.. Blah....
I'll talk about my family first ... Basically, when my grandmother would treat me wrong with her verbal lash outs (for no reason!!!) my first option would be to get the hell out of New York and hide from her in Baltimore. Even when I would go to NY, I wouldn't go visit her... I would stay with my friends and pretend that my family members in NY didn't even exist. Problem solved! No headache. No stress. And it worked for months! Until I would get to missing her and her jokes and her hugs and her food and her love... So I would say eff it! I'm going to visit her ..and boom! Her mean streak would start all over again! Making me totally regret going to see her! It sucked! Big time! It hurt too...
My friends were the ones who turned on the light bulb when they said, You will always have problems with her because you're a runner.
Blah!!! I hate when my friends do that! They plant these efflorescent seeds in my head that I reflect on! I mean they were absolutely right! I didn't want to live like this for the rest of my life! I didn't want to have to avoid my gran forever! So finally, I sat her down and told her how she makes me feel. Face to face... Woman to woman. And I gotta tell you, change didn't happen over night.. We've had to have more conversations than just that initial one ..but today, I can proudly say, she has truly stopped looking at me like a scared little kid and began to respect me as a woman. Because I had finally faced her and my problems with her, like a woman.
***
Now as far as love goes.. (Because if you remember, I told you, I was accused of running from love) ..well, I don't agree with that at all.. I do not run from love. Nor have I ever ran from love. Let's be honest, I've actually chased men more than I have ever ran away from them! So no! I have never ran from any man in my life. There hasn't been one that has made me stay and fight .... And don't get me wrong, I've done my share of fighting but that was shadow boxing! There was never a guy who was jousting just as hard as me to sustain our relationship.. And once I would realize that the relationship had become this obdurate fray in which I was battling alone, I would pack my shit and be out!
That's not running .. Is it? I can answer that myself .. No, it's not. It's called maturity... I was mature enough to let go of someone who wasn't holding on to me. Which took a great amount of courage... The courage to be alone.. And it took some of my 27 year old wisdom.. The wisdom to know the difference between solitude and loneliness. And the wisdom to use this solitude to better myself, instead of jumping into a relationship with someone else. Oh and let's not forget a strong, unwavering faith! The faith to believe that the right man is on his way. Did I mention patience? And I certainly posses the patience of an inner city teacher!!! The patience to wait!!! not yielding to temptation ..but literally waiting because I know that the real is coming, no matter how long it takes!
Good day folks,
V