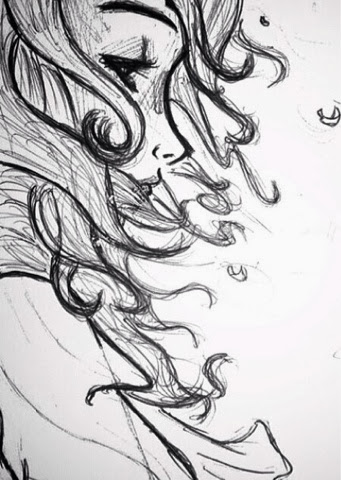 She dropped her books and he picked them up ..
fingers touched..
with the magnitude of the Earth's last battle..
A daydream.
Foreshadowed.
She barely held on ..
Found herself ..lost in his dark
innocent eyes
and forgot that she didn't even know his name
but still
She could not force her hand
to cease fire..
Read way too much Alice in Wonderland
that day..
so her mind was racing faster than the Hatter's
as she imagined him ..
her thoughts were so loud they screamed
"him is made to be with me my me my mine!"
her ..very mind
was in the State of Disarray  ..
And she was well traveled
but had never been there..
but it was making prefect sense ..
there he was, her perfect fit ..
slowly he slide his in between these.. these hands ..
which wiped so many salty tears.. rivers of shame, pain, loveless sex, the holiest regrets ..
but the eyes never exhausted their exotic beauty..
and never lost faith even though the vision was blurred
with the sight of wilted gardens thirsting for summer's rain..
yet, the (sole of the) feet continued to walk towards the mark
of the Most High
because the Soul knew that a queen was once a princess was once a peasant ..
was once ....
considered less than
but never.. never not a woman
of promise..
Believing in the premise
that God planted
in her mother's womb
And as his tips
touched the lips
conveying a love
heaven sent..
her tongue told him to leave ..
In the most respectable way he said
he won't go ..
he knows
she seems
hard to handle
but everything ain't what it seems...
He knows
How to read a distorted map
Perhaps
he has a degree
in archaeology
Discovers the seams
of her walls
and pulls at each loose thread
until, to the floor, they fall..
weak now
not nearly strong enough
to contain
her heavy-weighted fears..
so they burst out from the depths
of her winter-calloused canvas..
and flee
into the darkest sea..
never again to be seen ..
..dried volcanos no fire no ice
no elements could survive
in the barren battleground
that was once the residence
of her heart... ..
his touch ..
A Godsend..
God sent --clouds
laced with His grace
and the gift of longevity
in every raindrop..
and everything bloomed..
love so tall that it couldn't hide..
exotic eyes ..smile
as fingers touch ..
She grabbed her books
"thank you.."
dark innocent eyes smile too
but nothing more is said
and he continues walking away..
forever
She is living
A daydream.
Foreshadowed.