All Black Boys Go to Heaven 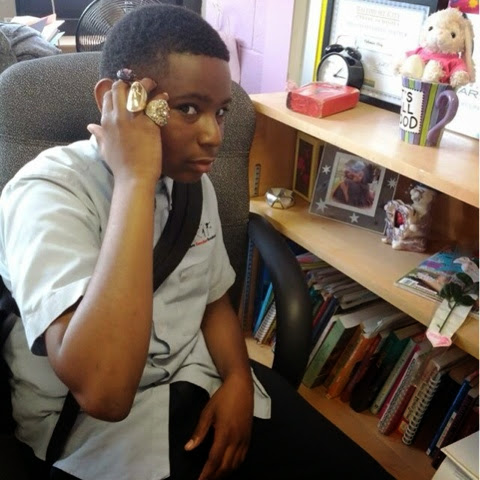 "Man.. Fuck Ms. Odeyale! I don't care no more.." Tears ran down his full, brown cheeks as he tried to play tough.

"First of all, watch your mouth. I may not work here anymore but you know I don't play that! Now come on Naj.. It's just me and you.. You can fix this.. You just need to humble yourself and do the POL again." I tried to convince him that it wasn't over. He could do it again. The entire panel of teachers was on the other side of the door deliberating, while I tried to calm him down.

"It's too late. She failed me. Fuck her. I don't even care no more!" He threw his papers down to the floor in the most melodramatic manner and continued to sulk, just like he always would when he got into trouble.

Najee was the smallest in his grade but had the biggest mouth. He would say anything to anyone but as soon as an adult would call his mother, he would break out into tears and play the mama's boy role, like most of my boys at BFA.

Baltimore Freedom Academy was the first school that I taught at as a lead teacher. I spent four years there and Najee was my student during my last two. I wasn't intending on being at his Presentation of Learning (POL) but I ended up catching the tail end because I went to visit my friend Strick when school had let out. All eighth  graders had to complete a POL in order to graduate from the middle school. When I got to the office, Strick told me to go talk to Najee..

"He's in there being an asshole. See if you can get through to him."

"I'm not going to tell you again to watch your mouth young man. And stop saying you don't care. If you didn't care, you wouldn't be crying. When they come back in here, ask for another chance to do it over.. This is your education and your future, not theirs."

That was the last time I ever saw him ..and those were the last words he ever spoke to me..

I walked out of the conference room as the rest of the teachers walked back in. I didn't realize until now that he had grown during what seemed like such a hopeless conversation. Najee went from saying, "She failed me." To saying, "I failed." Without either one of us knowing it, he began to take ownership of his actions..

He may have failed Humanities class but he was far from a failure. Najee was very smart and witty. When I was his Humanities teacher, our classes were gender-based. I taught the male classes. I would always brag to the other students about how Najee's comedy was always appropriate and right on time. I probably shouldn't have encouraged it but hey, funny is funny.  Besides, he did very well in my class. He was a natural writer, fluent reader, and audacious yet insightful speaker during mock trials and socratic seminars.

I also loved him because he was one of my only students who never grew taller than me. From his very first day as a 6th grader, I always called him chipmunk. His little fat cheeks were so cute, as was his dark curly hair.

"Hi Miss Clay!" He would run up to me at least three times a day to hug me, smiling and asking me, "How's your day?"

I would always have to peel is little arms off of me. He had a little crush.

"Miss Clay is my wife!" I heard him say to Jarrod as I walked by them at their lockers.

"Not appropriate. Not at all." I immediately told Strick, who was the behavior dean at the time. "Talk to that boy! I don't have time for little scandals!" I was and still am, very careful about the relationship that I have with my male students. Not sure of exactly what Strick said to him but from that day on, Najee never hugged me again.

"What's up Miss Clay!?" He said in an attempt to sound 'cool', with his hand out to dap me up.

"I'm a lady Naj.. You shake a woman's hand, never dap her up." He took heed and for next two years he would greet me with a handshake and a British accent, "Ello Miss Clay! How do you do?" Made me laugh every single time. I loved it.

I sat in my classroom today, alone, having lunch, when I received a text from Strick.

"If you didn't hear by now.. Najee was shot and killed early this morning....."

I read it at least ten times and then called my friend.

"Yea man. Najee Thomas. It's on the news. I can't talk right now, my class is walking in.." Strick said before hanging up. I had to go too. My class was also ushering in.

But I still couldn't believe it. It just didn't feel true until I went online and read the article for myself. "14-year-old slain in South Baltimore" is what the headline read. His body was found in a home in the Cherry Hill area of the city around 1:30AM. No suspects. Just a bullet, straight into his head.

The tears still wouldn't come down. First I froze, then I grew angry, then I became numb. My students knew something was wrong and asked me if they should just read independently. I couldn't talk. I nodded a yes-gesture and laid on the floor with my journal. I wrote and wrote until I couldn't think anymore.

My heart poured for his mother. She was always his biggest advocate. I thought about his father. He would talk to me about his dad being in jail. Even though he would always say, "I don't care." I knew it affected him. So much so that he wanted to become a lawyer and fight for wrongly accused criminals. He loved his father. He needed him. We all need our fathers. But I guess he's with our true father now, God, up in Heaven.

This past week alone, three teenage boys were murdered in Baltimore. My students asked me why... I don't think anyone can answer that. But I do believe their spirits are resting in Heaven. The way I look at it is that it's hard down here for our young men of color.

As a teacher, I believe that raising black boys is difficult. The system isn't set up to produce them with quality. But the jail house has them in the highest quantity. Are things racist or are they regular? - whatever it is ... The rest of us can't even fathom the mental abuse that they still have to endure, even now in 2014. Some of them are surrounded with a village of loved ones who look after them and help to equip them with the knowledge to endure such inequalities but others, well, they often don't even get the chance because of unforeseen circumstances. I truly believe that God is well aware of this ...and this is why I think He calls our black boys home to glory. It's like the old spiritual song says, "Some glad morning, when this life is over, I'll fly away..." No more pain, no more suffering.. They are now at peace.