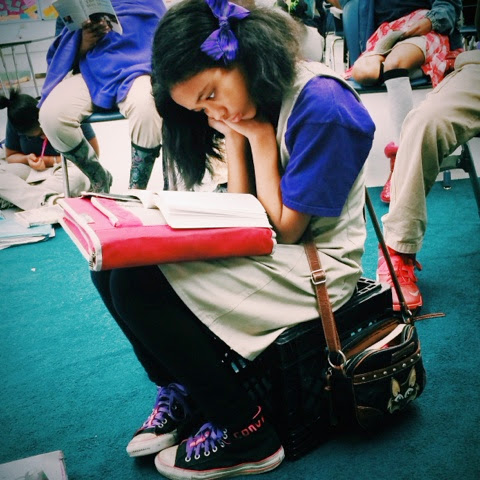 Yesterday my students and I were reading chapter 4 of The Other Wes Moore. We came across the passage where Tony, the Wes Moore that is currently in jail's brother, grew disappointed in Wes because he began selling drugs. Although Tony himself was a drug dealer, he tried to tell Wes not to be just like him, simply because he had the potential to be better and do better. Wes did not listen. Instead, he denied the fact that he was selling drugs, causing Tony to walk away from him and never try to warn him about staying out of Baltimore's treacherous drug game again.

So I asked my students: Can you relate to this? Do you know anyone who is "not doing the right thing" but tells you to do the total opposite? How does it make you feel? Do you respect their advice?

They all anxiously raised their hands. I urged them to hold their thoughts and write them instead of just sharing them out loud. I wanted their responses to be thoughtful reflections on the people who are in their lives and how their actions and words may impact them now and in the future.

Once we began the discussion, it turned into a socratic seminar-styled conversation, filled with insightful and thought provoking perspectives that I captured below.

***
“He’s the spitting image of what not to do. That’s the inspiration.”
-Scott

“It seems to me that they want me to do better than they ever could. That tells me: Don’t follow in their paths.
So, I listen."
-De’andre

“I listen to my uncle and pray I don't get killed on these Baltimore streets.”
-Ty
"Seeing what they do makes me feel like what they are doing is the right thing to do... But then they tell me not to.. So I really don't know what the right thing to do is. But I know I don't want to be like them. They have nothing."
-Jahiem

“I just want to make my Mom proud.”
-Jeremiah

“My dad made it look cool to have a lot of women. But now I see that it’s nothing but drama."
-Rae

“I’m afraid of becoming like them. But I will not be them. I won't let my life end like theirs."
-Kylik

"She gives me advice, but it’s no use. She's on the streets as we speak. I don't respect her. But then again, I know to do better than her, from her life itself."
-Bishop

“She sells drugs. It confuses me when she tells me not to because she's the flyest. She makes me want to do it to get easy money, but I don’t want to get shot up.”
-Sade

“The fact that they are telling you what to do shows that they can do better, but choose not to.."
-Vernon

“I listen because I want the same thing for myself that they want for me.”
-Tazea

"My mom wants me to do better than her and my dad too. So I will do better. I want to make her and my grand mother proud."
-Sky
"Other people go through things so that we can learn from their mistakes and not make the same ones. It's simple."
-Timyja
***
It's quotes like these that give me hope for the future. With that said, we as adults, have to continue being our children's greatest role models.. Leading lives that show the youth right from wrong, owning our mistakes, and being honest with them about how to avoid making them. And we don't always have to do this through verbal dialogue because they are always, always watching us.. So remember: Lead by example.
-Ms. Clay
Baltimore City Day 28 My Students Will Change the World Wisdom