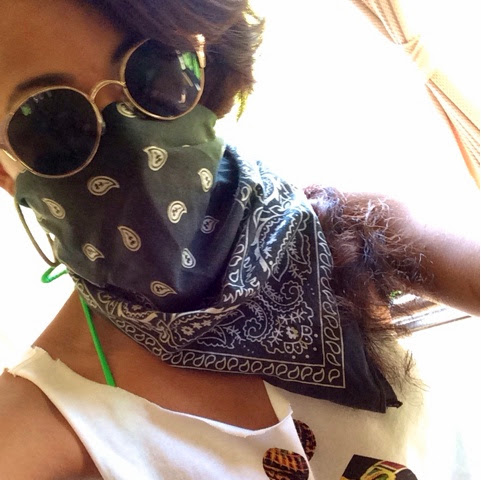 It was too late! The almondy skinned boy ran as fast as he could pass our truck! His face was covered with a camo-print bandana, so we couldn't see his face. But I will never forget the big black scar on his back, as he ran as far away as he could.

"Meekz! Damnnnnn he got you!" Shelly said...

"Ahhhhhh!!" I screamed in a tone so high it could break glass!

Just like it had been for Meekz, it was too late for me! They got me! As my Maybeline eye-liner slide down my face, all I could do was laugh! 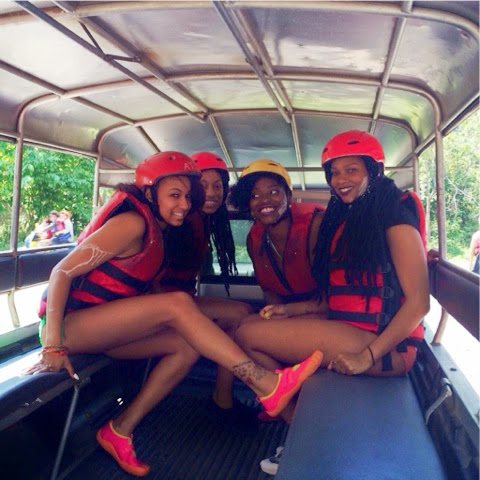 We were having the time of our lives. It felt like childhood all over again. Meekz used the end of one of her locks to wipe the water and mascara mix from my face, as other foreigners watched. Here we were, fixing each other's faces, in the midst of a water fight!

It was the most frightening fun ever! The only downside was us being unarmed. The locals were celebrating the Thai New Year in every part of the country! Their ritual is to throw water and paint at people! We asked, why water? Our driver told us it was most definitely because of the heat!

So as we sat in the wagon that rode us to the river, we endured every aqua explosion that hit us!

By the time we got to the river for rafting, we were drenched! None of us cared! We walked down the steep steps to get on our raft, all 4 of us held hands. Little girls, I swear we are.

We were told not bring our cameras on the raft, and we usually take heed to advice that involves our safety and our phones! But Shelly was pissed when she saw some girls from Korea using their phones to take pictures on the raft next to us!

"Girl calm down, we can just ask them to take a pic for us and have them email it to us... Excuse me!! Can you take a picture for us please?!" Nikki is never afraid to ask for anything, from anyone.

"Sure! But can we take a picture with you first?" The girls in the next raft were so friendly!

"Yes! Of course!" We all said to them.. And after a few pics Shelly wasn't upset anymore.. 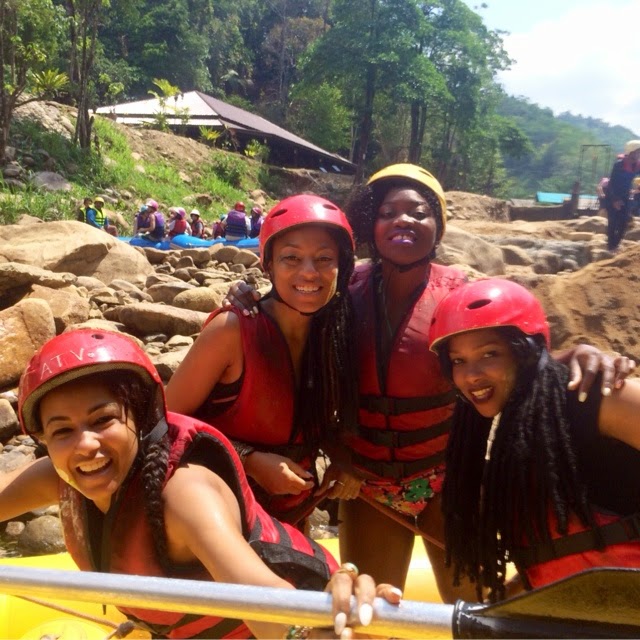 She wouldn't have been able to maintain an attitude for what was about to happen next anyways! Rafting was the wildest thing ever!!! One of us was bound to lose our phone in the same way Nikki almost lost a tooth. 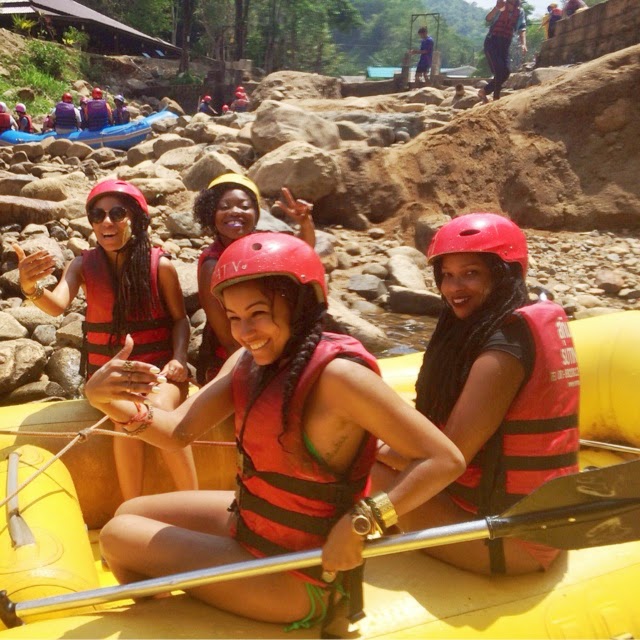 We had two of the youngest guides with us! They had us going so fast!

I don't know what the hell they were saying but every time they said it, we would pull over to the side of the river.

Sounded like a good plan to us! As soon as the big white waves would come toward us, the raft would race back onto the rocks and zoom! We were flying down the river. 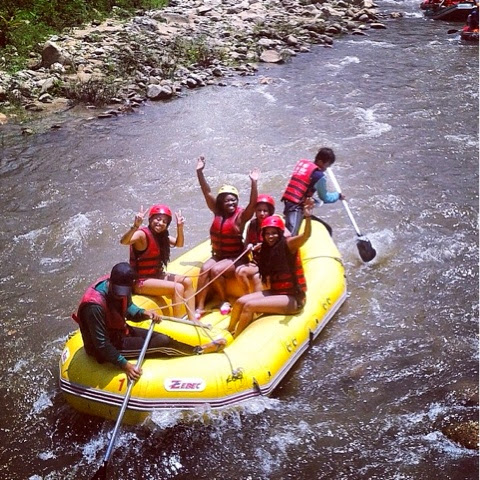 "Nikkkkiii get downnnn!!!" I yelled! I saw what was ahead!

"Wooaahhhhhhh" One of the paddlers tried to slow us down.

Our lives flashed before our eyes! We crashed into a long tree branch and it went directly into Nikki's mouth!!! We all froze.. All of us but Shelly! She opened Nikki's mouth and used her fingers to search for blood or a missing tooth! All the other rafts that saw what happened stopped moving to make sure the little American, colored skinned girls were okay. We felt safe but we weren't even done with the course! Which meant we still had to hold on and protect our grills!

The water seemed to get higher and faster the farther we went. The rocks were everywhere. This was no cute canoe ride.

"I'm trying!!!!" It was so hard when ever we flew to the opposite side of the raft to get back up!

Meekz stopped yelling at us after she, herself, fell on top of me about three times! We started calling each other Ike and Tina because of how we were abusing each other!

"Left a good job in the citaaayyyy!" Nikki started singing!

"Working for the man every night and day!!" We all joined in!

We laughed so hard! Here we were in the middle of Asia, hitting waves harder than the wind, and singing Tina Turner! Only us!!

We we got off of the rafts, we weren't even close to the end of our action! It was time to rent our ATVs. Neither one of us had ever rode an ATV. I, for one, was a nervous wreck! I was anxious about crashing! But of course I prayed and had faith that this wouldn't be the death of me! 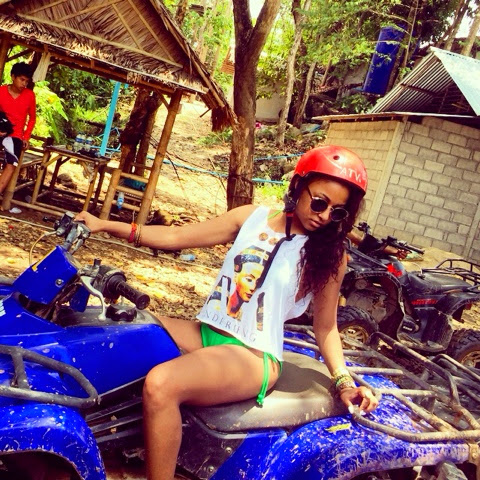 "Val, don't speed! And remember to hit the brakes when we go down hill!" Nikki said to me as firmly as she could.

I was a bit shocked. Nikki is the biggest daredevil I know and she was telling me to be careful. Something was different.. But I didn't have time to ponder it. It was time to rock and roll! 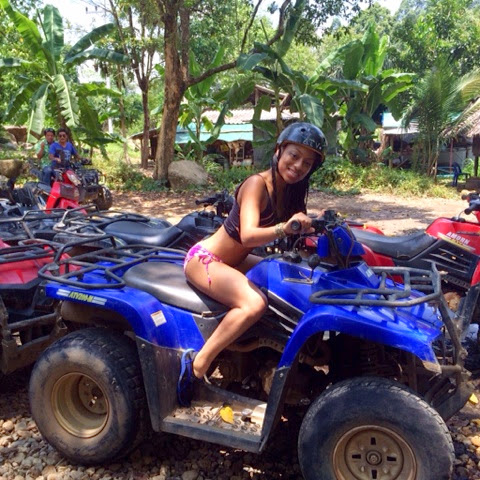 Nikki and I drove our own ATVs, while Shelly and Meekz rode on the back of 2 locals'. At first I went as slowly as I could. You would've too! They had us in the jungle! Riding up and down dirt hills, through big mud puddles, and right next to elephants! In addition to being nervous, I was trying to take it all in!

What the heck! I'm driving an ATV next to a family of elephants!! I never even dreamed of experiencing this! That's really an elephant right there!!?

"Shhhiiittttt!!!" I snapped out of my awe moment as soon as I got drenched with a bucket of cold water! I didn't even see it coming!! My entire body was soaked.

Then they got Shelly next! We loved it! It was so hot out there, we needed that water! We rode for another hour. I began speeding and really feeling myself! I loved the control I had over that machine. It was empowering! And sexy!

When we finally got off and headed back to our villas, Nikki began reflecting on the day.

"Guys.. I really almost lost my life out there. I really have to be more alert. I think that was God's way of waking me up. That's why I was so careful on the ATV... I think I might have gone too fast and crashed if it wasn't for me almost losing my tooth on the raft! We all have to be more careful."

Later that night, we attended a tranny show... The biggest transsexual show in Asia. It reminded me of Lips in NYC. I was very surprised at how much those men looked like women but at the same time, I was saddened by them. They seemed happy on stage but after the show, they were all lined up, begging for people to take pictures with them so that they could make their 100 Baht per person. Pitiful. Im not judging but I really just felt like this can't be life. It was soft prostitution... Even the Rocketts back home don't charge you to take a picture with them after a show. They stood there begging and practically grabbing everyone to take a picture with them. It was like they were begging to give us a lap dance for a couple of dollars. Again I'm not judging.. But it was a sad sight to see. 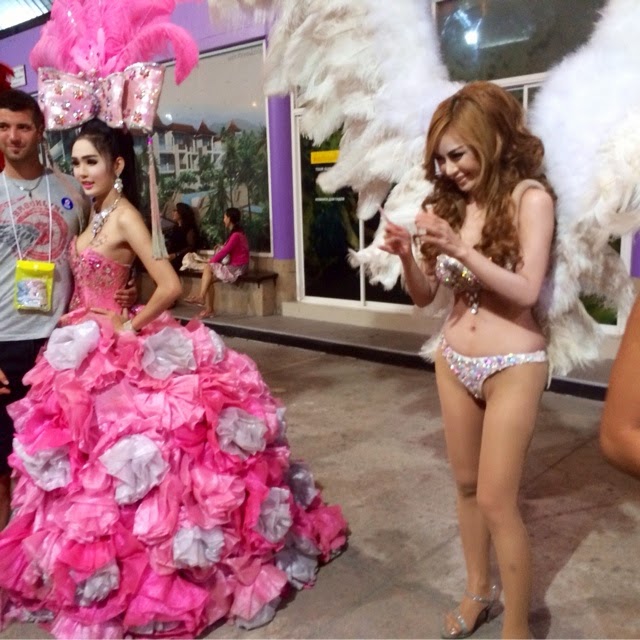 I also thought about how old they must have been. Wondered if this was the only place that they were accepted. Had their parents put them out? Was their sexual preference outcasted? Thought about how the audience was filled with tourists. Is this a spectacle? Are we celebrating this or exploiting it? By the middle of the show I was totally turned off and over it. I guess all of my mixed emotions and unanswered questions really got the best of me.. 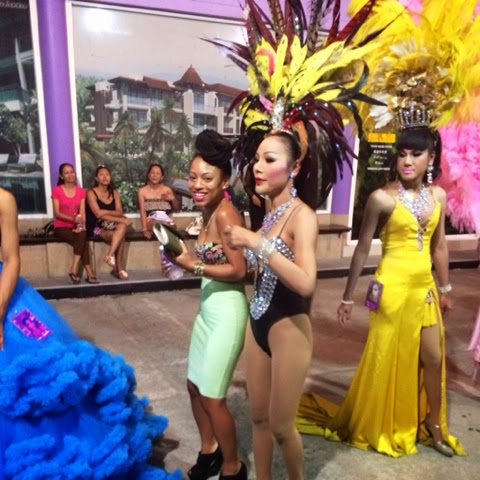 ...
After the show, it got really late and we were exhausted... We headed home but we couldn't go to sleep because we had to wait up until midnight.
The four of us laid on Marika's big bed and talked about chivalry. The girls shared stories about the men in their lives when out of no where, the door bell rung.

"Okay it's ready! Turn the lights off! Open the door!"

"Hello?" Asked Carissa, as she walked into the dark villa...

We all embraced her with hugs and kisses as we sang the black birthday song to her. I smiled as I watched her make a wish and blow out her candles. 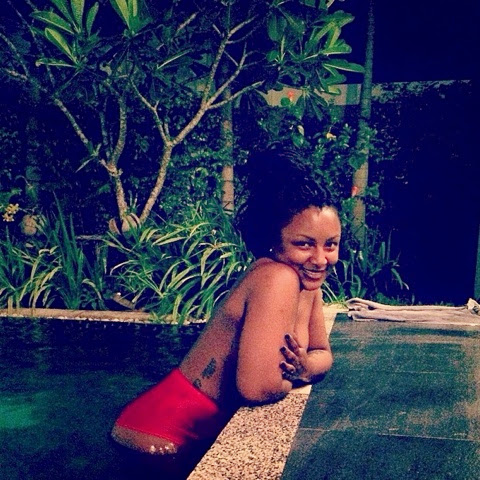 Not even a five minutes later, she was in the pool laughing and telling stories with us. We were all in bliss.

I wished for nothing more than the courage to be eternally happy.
...