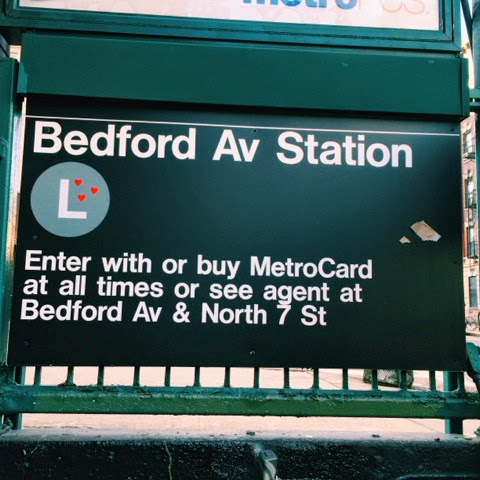 We grabbed a bite in Trebeca and then headed to Williamsburg...

"Look!" he said, pointing at the train sign.. and there they were ..3 hearts around the L of the L train.

"Oh my gosh!!!" I said, as I froze for a moment, admiring the symbolism of the red, heart-shaped stickers. Those hearts around that L made so much sense and yet, they were so unexpected. Who would think to put hearts around the L? At the same time, I thought, who wouldn't? "I love that.." I said, before taking one more look at them and running down the entry stairs of the train.

"You got a metro?" .. "Nah." .. I answered.. But as I reached for my purse, he pushed my hand back, took out his wallet, and proceeded to get me one for $10. I'm so independent.. I'm not used to anyone doing little things like paying for my traveling expenses.. so in my head, I was like, "GIRLLL HE GOT MONEEEEYYY!" ..but I'm a lady. So on the outside, I remained composed and gracious.

I mean really, it was such nice gesture, in addition to taking me to lunch... But I  felt kinda bad. I really didn't deserve for him to be so nice because of the way I treated him earlier....

As we stood on the platform, waiting for the train, I began to reflect on my day so far. Before we went to eat, I had just gotten into the city from Baltimore. The bus ride was long and made me nauseous. And when I arrived in the city, I had to fight with my bank about replacing my stolen ATM card. The phone rep was so annoying and could not help me. Pissed me off! Despite the weather being exceptionally warm and sunny for this time of the year, being hungry and not having access to my money drove me up the wall! I grew very irritable and was super dry toward him for most of the afternoon because of my hunger pains, pains that were mentally afflicting me more than they were physically. A flaw that I try not to show people is how testy and cranky I can be when I'm hungry, sleepy, or when things just aren't going my way. But today, I just couldn't help it. And unfortunately, he was there to experience the brunt of my anger. I don't know how he managed but the entire time that we were together, he was very patient and understanding with me and my grotesque attitude. Of course, after we ate, my entire demeanor shifted like Dr. Jekyll and Mr. Hyde. What can I say? I possess the true phases of a moody Gemini. Luckily for me, he didn't seem to mind.

"I'm sorry for being so bitchy.." I said, as we watched the train on the other side of the platform zoom by. I know he heard me but he didn't even acknowledge my apology. Instead, he causally asked, "What music did you start your day off with today?" "Nothing ..I didn't even listen to anything on the bus.." "Exactly.. That's why you had such a pissy day this morning. You gotta start off right! Here, listen to this." He put his earbud head phones in my ears and played a song for me. It was Pharell's latest, "Lost Queen". I immediately began dancing and learning the words. I was in love with the song already and I just knew I was "the lost queen." After the song was over, I turned on my own iTunes. "You want to hear some good shit?" He laughed at my profanity and I took one head phone out of my ear and put it into his. I played, Rose Royce's, "Wishing on a Star". He put his arms around my waist. I put mine around his neck. And we slow danced, as if it were only he and I on that platform, all alone. I closed my eyes and sang. Thinking about the lyrics... letting my imagination overcome my reality. No one could tell me that I wasn't under the very same stars that Rose was singing about. It was magic in the midst of chaos.

When the L finally came, I still hadn't snapped out of the trance. The train was packed. So we stood near the door, headphones still being shared between our ears. Rose Royce was ending, so I switched to the Delfonics', "La-La Means I Love You". I leaned closer into his chest, as the train caused us to sway back and forth. There was no room to hold on to anything but him. Still listening to oldies.. Still slow dancing... Still pretending that no one was there, but us. I was so caught up in the moment that when he lifted my chin to kiss my lips, I didn't even hesitate to oblige. He kissed me. I mean, he really kissed me... with so much passion and the smoothest hint of zeal. My body froze. My feet seemed to stop my slow-paced two step long enough to allow my tongue to dance. I was nervous, yet at ease, as he gripped my small frame.. One hand around my waste and the other held my face. This was my first real kiss in months. I felt like a little girl. All I could do was exhale. Just like the hearts around the L, I wasn't expecting that.

"Can I play something for you?" He politely asked when the Delfonics was over. "K" .. I said, as he took the headphones out of my cell and put then into his. He played a song called, "Let Me" from an underground artist known as The Vamp. The words were simple, "Let me ..be your everything.." And in that very moment, he was my everything. I needed nothing more than him. And I wanted nothing more than to cherish the blissful contentment of it all.

It was perfect. We didn't say anything for the rest of the ride. Just listening to the music, holding each other, and smiling at couples who first smiled at us.

After almost two years of abstinence, here I was in the rumbling belly of the city's dragon, experiencing intimacy.. engaging in shameless PDA.. and basking in effortless romance.. . Before I knew it, we were at Wilson St., my stop. As I prepared to exit the train, he gave me one last kiss... and I waved at him in a gesture that said goodbye. That was the last time I ever saw him or those hearts around the L train, again.


Day 5 Living in the Moment Love