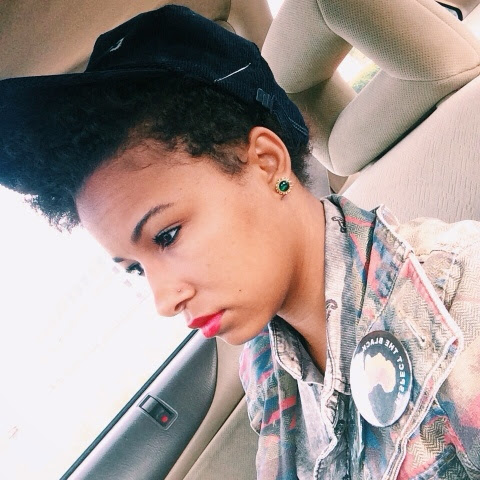 Beyond exhausted! I was up all night working on a 15 page paper for one of my grad classes. I barely woke up on time for work. And when I was on my way, I was pulled over. 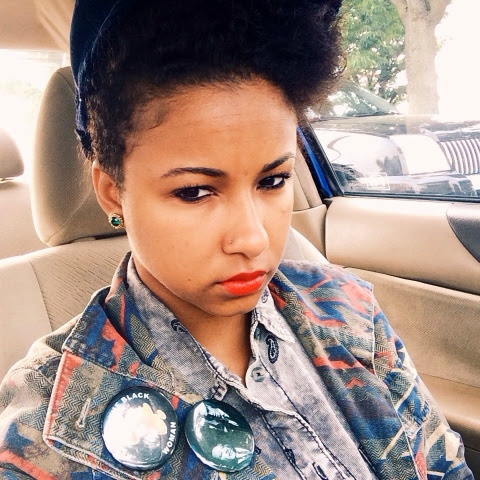 Anyone can infer from the picture above that I was super annoyed, ready to go back home and jump back into my bed. But of course, I couldn't .. We were going on an adventure race with our students today. The adventure race is a city-wide scavenger hunt. We travel around the entire city from Camden Yards to Federal Hill .. Fells Point to Mount Vernon and the inner Harbor by foot, bus, and water taxi just to find different sites and answer historical questions. I wasn't in the mood for it today at all.

When I walked into my classroom, my 8 girls knew something was wrong. "Guys I need a moment. I got pulled over and I'm tired."

"Ms. Clay, you should just read that book you always give us when we have a bad day." Aliyah suggested. 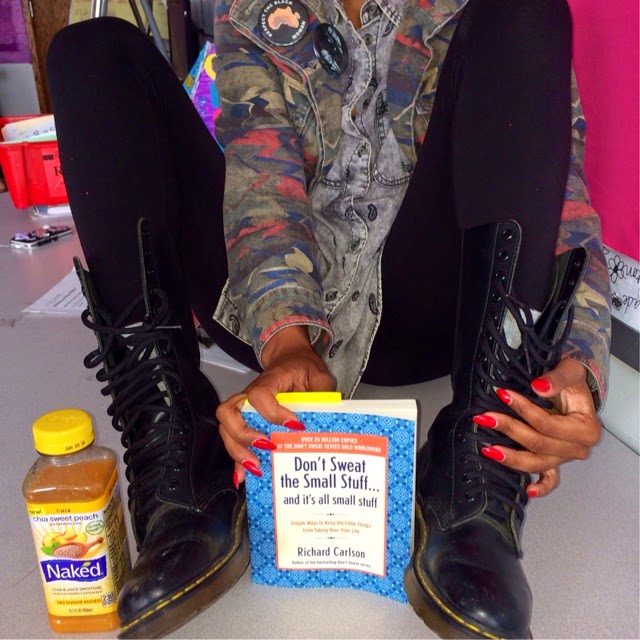 "Yes Aliyah! She needs to read "Don't Sweat the Small Stuff"! Let me pick out a chapter for you. You just sit in the corner and drink your naked. We got you Ms. Clay.." Kiara, my Gemini birthday twin, is always very nurturing toward me and the rest of the girls when we need it most.

"Here.. Read chapter 92. You already have your sticky note on it. So this will be a reminder, nothing new." I smiled. She sounded just like me. 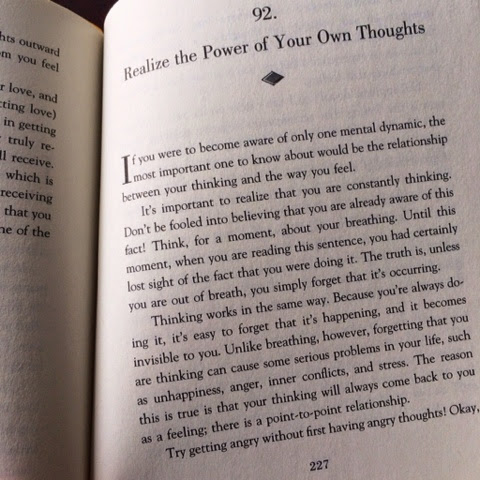 But she was right. I needed to remain positive and remember that I was in control of being happy or being annoyed for the rest of the day.

So I fixed my 'tude and started to prep the girls for the trip.

Once we got outside, we realized we really didn't feel like going all over town.

Everyone unanimously answered me with, "FUN!"

"So let's just walk and see what we run into!" 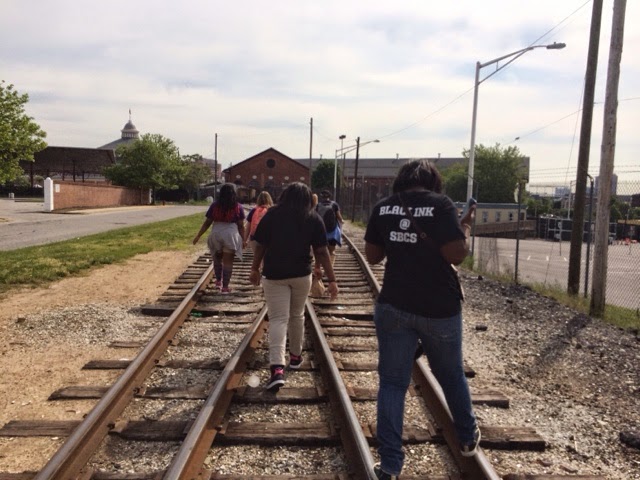 This was perfect for me and my freedom need. I'm not much of a structured person when it comes to outdoors activities. I prefer to just go with the flow and see what happens. 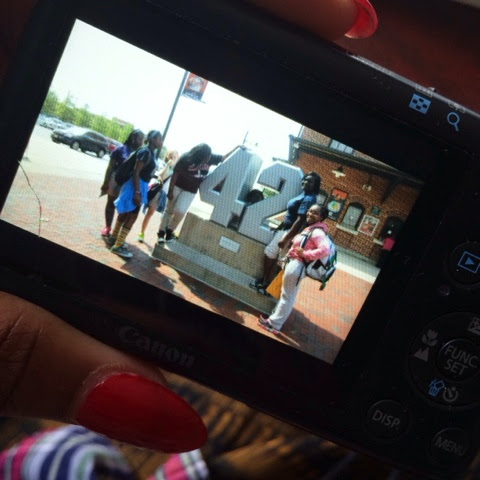 We headed to Camden Yards. I took a few pictures of the girls with my Canon camera instead of my iPhone to preserve  my phone's battery life. 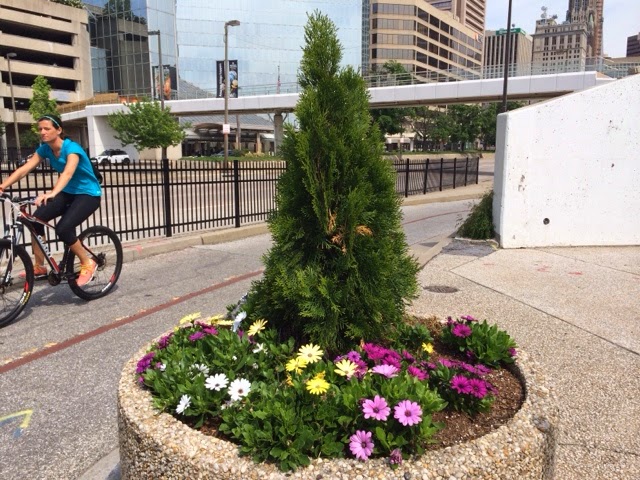 Then we headed to the Harbor. I spoted this daisy bush and went to take pictures. The girls followed behind me. 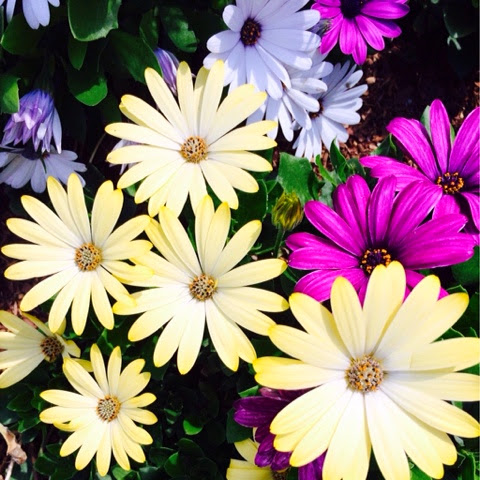 "Ms. Shaw!" Payton screamed to our other chaperone. "What is that?! Something is moving in there!!"

Suddenly, a duck flew out of the bush and onto the cement. 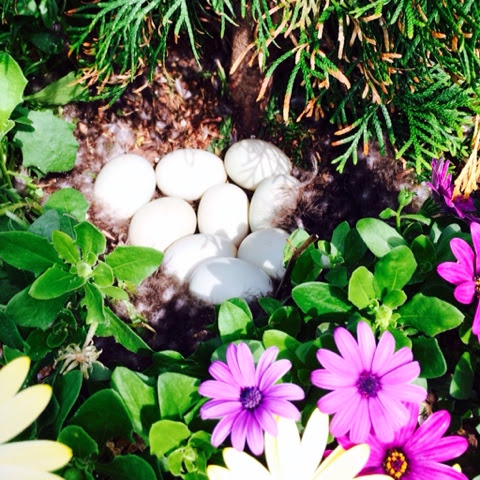 It was the most unexpected thing I ever witnessed. 9 eggs laying in the flower bush. How symbolic is this?! 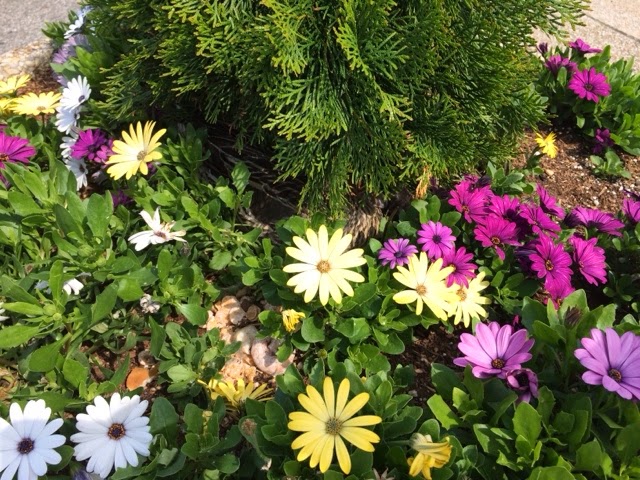 After a moment or so, the mama duck flew back into the bush to sit on her babies. If you look closely, you can see her .. But it's really hard. She's in there though. 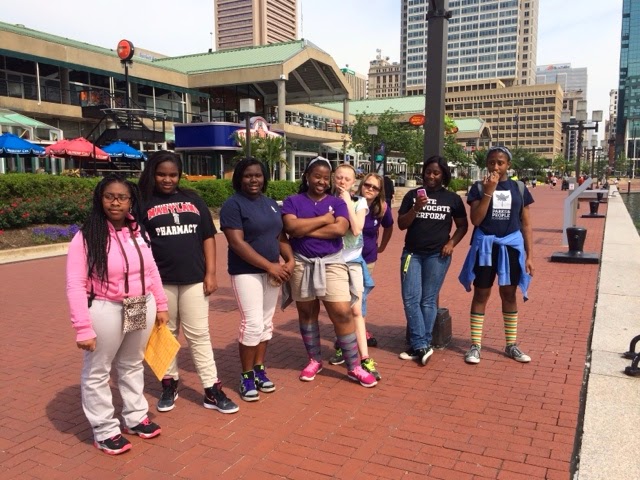 I thought my day was made but to my surprise, there were more laughs to come. As we stood in the Harbor, trying to figure out our next move, a couple guys walked by us.

The girls were totally captivated and began to stare.

"Did y'all just go swimming in the Harbor water?!" Zaria boldly asked, trying her hardest not to laugh at their appearance. They were both almost naked, bare foot, only wearing ripped shorts and each holding the Bible in one hand and a bouquet of white flowers in the other. 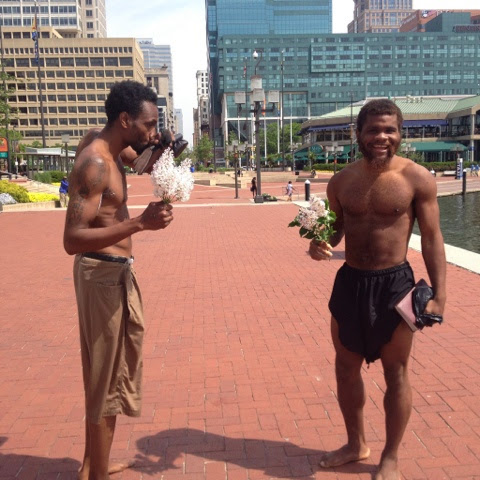 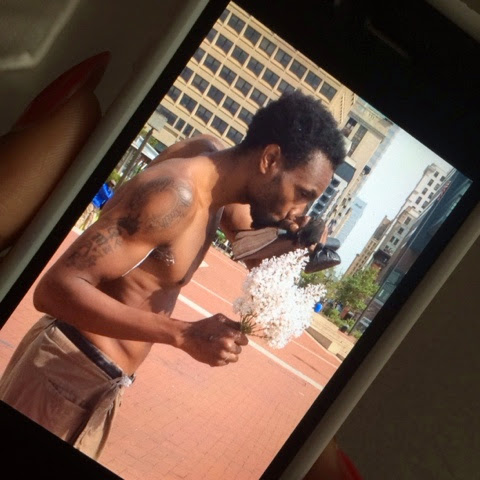 The girls busted out in uncontrollable laughter but the two guys were not offended at all. I have a feeling that they are used to being stared and even laughed at by curious people.

"We love God. When you see a homeless person, give them food.  Don't let your brother be hungry!" They said this in the most serious tone, with their West Indian accents. They were so serious that girls stopped laughing.... Until after they walked away! Then the laughter began again. That was so strange, yet intriguing. 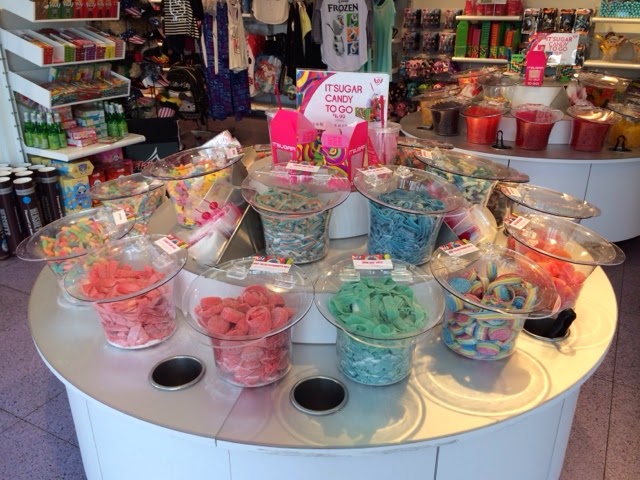 We made our way over to It's Sugar, the candy store. They gave us free candy! And I racked up on my favorite gummy bears - the clear ones! 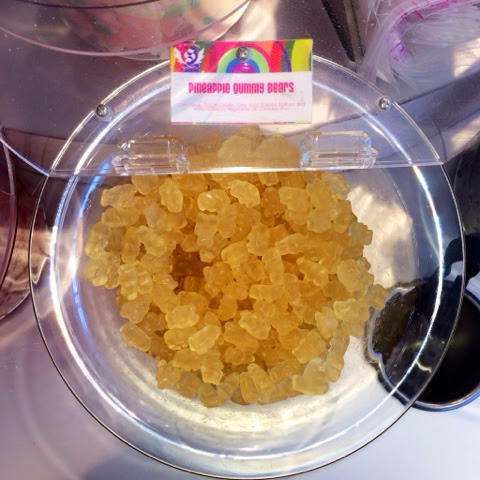 The candy was delightful but it didn't fill us up. We grew hungry ..It was time for lunch. We were about to walk from the Harbor to Fells Point but when we stumbled upon a metal dolphin fountain, we decided to eat there. The girls enjoyed their lunch and even fed some of the ducks.

Payton, being the leader that she is, decided to take off her shoes and socks to put her feet in the cool water. Then, before I knew it, they were all the way in there! 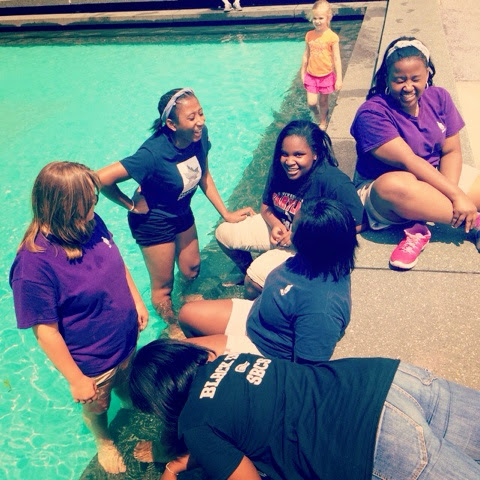 Laughing and playing, with their regular uniform clothes, in the middle of the Harbor.. Getting their pants wet was the least of their worries! They really had no cares in the world! 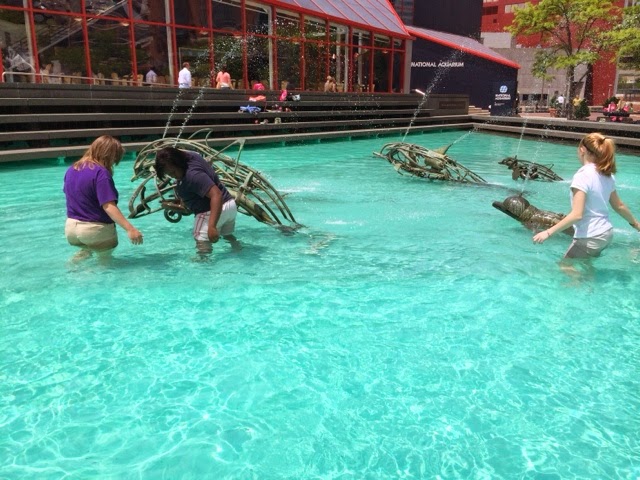 "Is this legal?" I asked, to no one in particular .. But as soon as I said it, the aquarium sequrity guard came around.

"Who is your chaperone?"

All of the girls pointed to Ms. Shaw. He walked right over to her..

They all got out and again, we all began laughing. We knew we weren't supposed to be in the fountain but it was just too much fun! I know some of you may say I was setting a bad example for letting them be in there but honestly, it was worth it. This is a memory my girls will never forget. 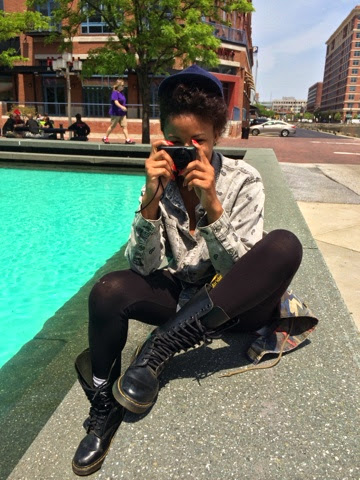 After getting out of the fountain, the girls laid in the sun to let their pants dry. Then, we rode the circulator back to our side of town. Before heading back to school, we stopped in the Dominican owned bodega so that we each could get an icee. Rainbow, strawberry kiwi, cherry, vanilla, and mango! Delicious! 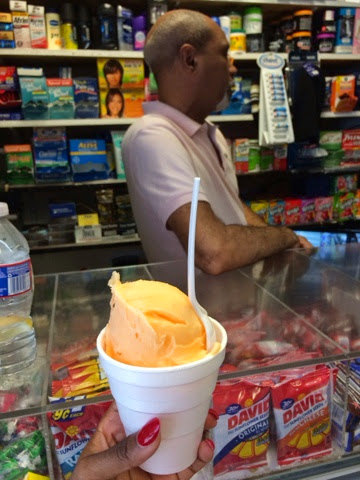 We were all exhausted when we finally got back into the school building. We laid on my carpet and shared our highs (best moments) of the day.

Initially, my high was seeing the duck and her eggs in the flower bush ..but after reflecting more, I realized that my high was really when my girls reminded me not to sweat the small stuff. Not only from the book but also from watching them be so carefree, in the middle of that fountain -illegally. LOL

This is just another reason why I love my students so much. They always pour into me, as much as I pour into them.

It turned out to be the best day of the school year for us all! And we even decided that we're going to start going outside and getting lost more often.