"The Inkwell is for blacks who made it..." 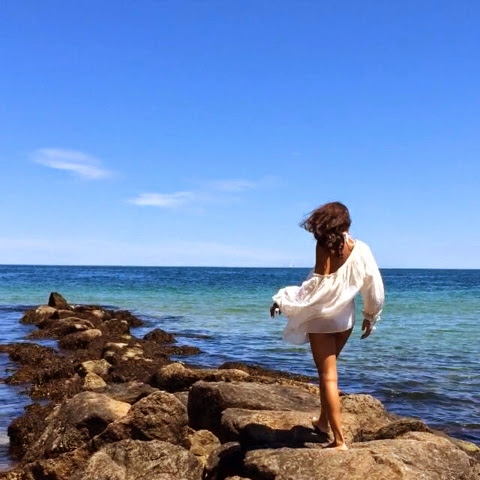 “Hello!” I smiled and spoke to the crowd of pale faces. Each looked up but not one answered. I looked back at Tieka, who shook her head as we walked all the way to the back of the packed shuttle bus. I was a bit offended and a little nervous about the possibility of facing racial discrimination. I knew the history of Oak Bluffs and was well aware of it being a historically black vacationing resort since the early 1800s. I thought back to the stories that I once read about the tension that transpired between whites and blacks during the Reconstruction Era in Massachusetts. But then, I eased my nerves as I remembered a line from Dorothy West’s, “The Wedding”. She described the Vineyard as “…a bulwark of colored society.” I began thinking about how much times have changed since she was a writer for the MV Gazette. My initial anxiety, which shifted into ease, was now becoming disappointment. I was dismayed by the fact that the population of whites on the Vineyard is currently about ninety-one percent, compared to a miniscule 2.5% of blacks. Before Oak Bluffs (one of the six towns on the Vineyard) became integrated, freed slaves, former servants, hotel maids, and even the son of a slave and a master, Charles Shearer, invested in these homes and built a cottage specifically for serving black vineyard goers such as Madame CJ Walker, the first black millionaire. After traveling all over the world, attending graduate school at Johns Hopkins University, and even participating in various national teacher conferences, I am used to being the “only one” in a room full of any other race but blacks. By no means am I saying that I did or did not want to vacation around any particular type of people but I really had my heart set on experiencing the Vineyard for what I have always imagined it to be: a vibrant community, populated with black ascensionist, who believe in climbing the ladder of success, much like myself.

Once we departed the shuttle and got on the city bus, I was relieved to see that we weren’t the only brown faces. There they were: About two other groups of young, black college students, sitting right across from us.

Before I could try to introduce myself, we realized that we missed our stop.

“I knew that driver wasn’t going to tell us where to get off like he said he would! I’m going to talk to my people!” Shelly was borderline-infuriated with the driver but she perked up as she hopped off of the bus to ask the girls for directions.

“I told y’all those are my people!” Shelly said as she skipped back over to us. “They are Jamaican! They come to the Vineyard every summer for 3 weeks. So cool right?”

That was definitely cool and their directions were exactly right. While we were walking, I realized how thankful I was that we missed our stop. It gave us a chance to get a peek at the town. It was around 9:30 PM or so but even at night, the Vineyard’s infrastructure was as fairy tail-esque as it looked in my National Geographic traveler magazine. The gingerbread cottages, the old carousel, the white rocking chairs on every front porch, and even the bunny that hopped around our hotel… It had only been fifteen minutes and I was already in love with the island’s quaint atmosphere. The Vineyard is truly a beauty, right in America’s back yard.

We dropped our bags off in our hotel room and decided to find something to eat. We headed over to Nancy’s where the jumbo butterfly shrimp are to die for! As we ate, Shelly and I noticed an adjacent table that sat three couples of color.

“That’s going to be us.” We unanimously laughed and high-fived each other. Shelly went on to talk about future couples trips as I stared at the group of older, married African Americans, who were summering in the Vineyard. Low and behold, right there on the boardwalk, under the Big Dipper and the North Star, I was gazing at the Black-American Dream. 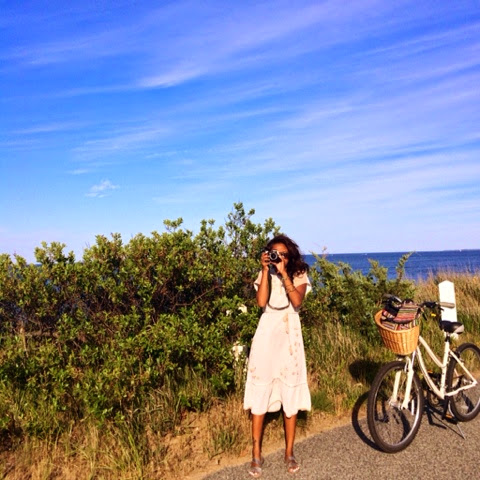 I slipped into an old white and blue bathing suit cover up, unpinned my hair, and put on my cyan-mint green earrings. I didn’t buy a new birthday dress this year. All I needed was that $22 pair of earrings that I saw in the window of my favorite consignment shop. Like my earrings, I just wanted a simple weekend with my best girls: the beach, bikinis, and big plates of seafood!

After everyone was dressed, we picked up our bikes and went to Biscuits for breakfast. I ordered a veggie omelet with mushrooms, green peppers, caramelized onions, and cheddar cheese.  It was tasty, just needed a little hot sauce. As the girls and I enjoyed our food, I began to start thinking about my grandmother. Tears filled my eyes because I was trying to hold my thoughts in.

“Let it out.” Tieka said, with a bit of discernment in her voice.

Even Marika stopped eating and looked me in the eyes, as if to say, “That’s what we’re here for… What’s wrong?”

“I’m just thinking about my grandmother. She worked hard all her life. So freaking hard… Riding the trains and buses every single day from Harlem to Scarsdale, cooking and cleaning as a housekeeper for Italians and Jews. She did the best she could with us. They would give her bags of clothes for us. Don’t ask me how but I distinctly remember wearing tee shirts that read, “Cape Cod” and “Martha’s Vineyard”. I was about 7 or 8. I had no idea what a Cape Cod was… nor did I know anything about Martha’s Vineyard. So for me to be here now, the grand daughter of a maid, it just makes me feel proud of my family’s legacy. Now I understand why she was so excited about me taking this trip. I never realized the impact that my life has on hers, even as her grandchild. I am living my grandmother’s dreams.”

The girls were listening to me and handing me tissues for my tears but I don’t think it really hit them like it hit me. Here we were, 5 young black women, who work hard each and every day, spending a weekend of respite in a place that was created for professors, doctors, big company owners, and politicians. We are always so hard on ourselves for not being exactly where we want to be in life yet this trip proves that we have already made it!

Our waitress recommended that we visit a number of beaches but I had my heart set on the Inkwell. If you’re thinking it’s because of the movie, you are exactly right.

I placed my feet on the sand that was segregated yet celebrated by its earlier inhabitants, who would casually say things like, "The Inkwell is for blacks who made it.", despite its derogatory and odious name. I felt the cold waters of the sea that Harlem Renaissance writers looked out to for inspiration. I walked on the stones that formed the jetty that Brenda and Kenny sat on when they decided not to end their marriage. It was breathtaking. I couldn’t have asked for more.

“We love when beautiful women visit our beach!” An older woman said to Nikki and I.

She was random but we had been receiving praise like that all day. There were so many beautiful black families on the beach, so much happiness in the air, so much peace. It seemed like each time we were in a close enough proximity to someone of color, they would greet us with a smile and a compliment. Even the officer at the lighthouse was as kind as he could be. He didn’t even know us but before we rode off into the sunset, he told us he was proud of us. And there it was again, the Black-American Dream.
***
Before I close, I want to acknowledge how friendly everyone on the island was toward my friends and I. With the exception of the people who totally ignored my greeting on the bus, everyone else, black, white, and Native American were very friendly and helpful. I hope that over the years, more young African Americans realize how special of a place Martha’s Vineyard is and find a way to visit at least once in their lifetime; if not for themselves than at least to expose their children to a world outside of their own..

...and to pay homage to those who helped self-segregate Oak Bluffs in the first place.