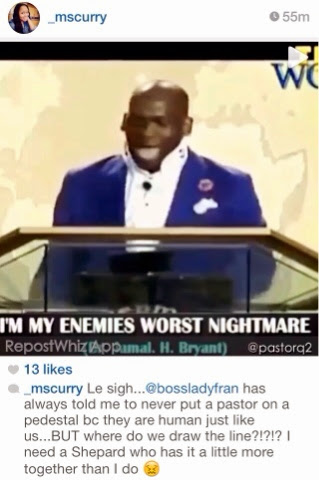 I was in NYC this past weekend so I wasn't able to go to Empowerment Temple, like I usually do on Sundays. However, I never expected the church to come to me!
Pastor Jamal Bryant's
sermon, well bits of it, have been all over social networks today, with captions and comments like the one above.

I spoke to my friends, who also attend the church, about what he said and then went back to my post-graduate course assignments. I had too much work to do to dwell on the topic any longer. Besides, we all agreed that the sermon was way more powerful than those 4 words. It wasn't until I read Necole Bitchie's post that I felt compelled to say something.

I'm not expecting folks to agree with me.. And I'm not making excuses for him. I simply just don't think it should be such a big deal.. Here's why:

@necolebitchie I go to his church. Have been attending since I was 18. Moved from NYC to Baltimore with no family at all. One day, Pastor Bryant called all unemployed members and visitors to the alter. It was only my second time going. There must have been hundreds of us. We all walked away with a job! Sounds crazy but this is truly the norm at Empowerment Temple. People who aren't even members can receive support, just by asking for what they need. This was 10 years ago. Here I was, only 18 years old - a freshmen in college, got a job that paid $11 an hour. And I haven't been unemployed since! Yes, Pastor Bryant is very radical. He says outlandish things that aren't typical for any pastor but that is what makes his ministry exactly what it is - always on point. Listen to the context of the message, you have to admit, the CB line was right on time. We live in Baltimore. This is America. It's 2014. He was being real. He knows his congregation and what they can relate to. I'm glad you posted the sermon for the rest of the world and posed the question about how they feel about the CB line, after reading the sermon. But I implore your readers to think about this: what if he gave that speech outside of the church and was not a "man of the cloth" would that make it acceptable? Can't he just be applauded for teaching the Biblical story in a manner that peaks the interest of folks who otherwise may have never taken the time to listen? Why must we be biased because he's a bishop? He is still a person. If we are going to ridicule him, we may as well make a list of ALL of the members of our society who play a part in perpetuating vulgarity and negativity. It's so sad that people are passing judgement about him because of his past... It's almost as if people don't have a past of their own that could be judged as well.

You can read her post, which includes a narrative of his sermon on her website NecoleBitchie.com. I have also included it below.

"An anointed woman of God is not dreaming about a man. An anointed woman of God is dreaming for her man. So when she really connects to who you are, she begins to dream about what she sees you accomplishing, what she sees you becoming and you with your silly stuff, go run off with a side-chick who don’t have no anointing.
The problem with Pilate, is a problem with a lot of men, is he didn’t know what he had. Had Pilate had listened to the woman he had, his life would’ve been better. Because he didn’t listen to the woman of God, he ended up losing his job, ended up in exile, ended up being kicked out of the palace, ended up committing suicide. If you got enough confidence to not be insecure and threatened about the woman God sent you, when she speaks, she is speaking from the voice of God of what she sees over your life!
Every sister just elbowed another sister, “he should’ve listened!” Every brother, would you tap another brother and say, “I should’ve listened to her.” God help me! Old saints, y’all forgive me but I gotta tell ya, these hoes ain’t loyal! You gotta find somebody!
Pilate lives in conflict because he washes his hands and then signs the death certificate. He could’ve put a curve on the whole movement of women’s suffrage. Women could’ve got the right to vote earlier They could’ve had the right to own property sooner if he in that right moment would’ve listened to what the woman of God spoke over his life, trying to help him. It was no benefit for her. She just wanted to see him in his rightful place with God!
You done found the right one when they are not into your car, your clothes or your income, but they got a desire to see you in the will of God. That’s how you know you’ve found somebody who’s anointed!"
...let me know what you think about the line, after you listen or read in context with the sermon.

-V
Nobody is Perfect