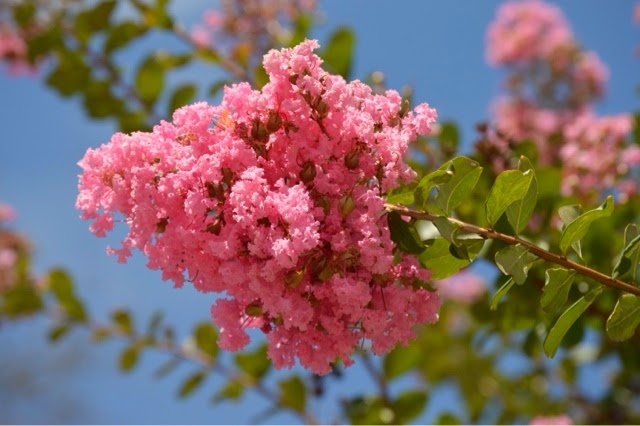 I'm working on a paper but I cannot concentrate. It's my last paper of this course. I need to just do it and get it out of the way but I can't ... It's just so boring.

My screen saver changes every hour, which doesn't help with my self-diagnosed ADHD. The image that is up now is this crape myrtle. It's totally diverting me from my task but these have been my absolute favorite trees all summer! They're usually purple, white, or red but my favorites are the pink ones - no matter if they are as light as a pristine pink or as bright as magenta, I love them all. Every time I see these trees, I know great things are about to happen... Because every time I have seen them, great things happen to me.

So of course, I needed to figure out if this was coincidence or if they are historically known to bring good vibes ...

According to what I read, the myrtle was brought to the southern part of the United States from China. This makes sense, seeing as how I never really saw them until my recent trip to the South. I actually captured this picture in Florida. They were every where.. I saw them a lot in Atlanta too. But it made me so happy when I saw them behind someones's house in Brooklyn on the morning of my event. That was a sign that the event was going to be a success, and that it was!

I also read that they were a favorite of Chinese emperors. Their daughters wore them during their weddings.

Another interesting fact is that they were known as the flower of the gods among the Greeks. The myrtle was actually sacred to Aphrodite, the goddess of love.

Today, people use the leaves for oil and even make tea out of them. They say drinking this tea with your mate will keep the love strong. Ha! I want to try it and see!

But it all makes sense. These ancient beauties are not just coincidentally making me feeling salubrious and buoyant inside.. They were purposefully created by the Universe to do such.

I love that...
Blogging in the Moment Summer