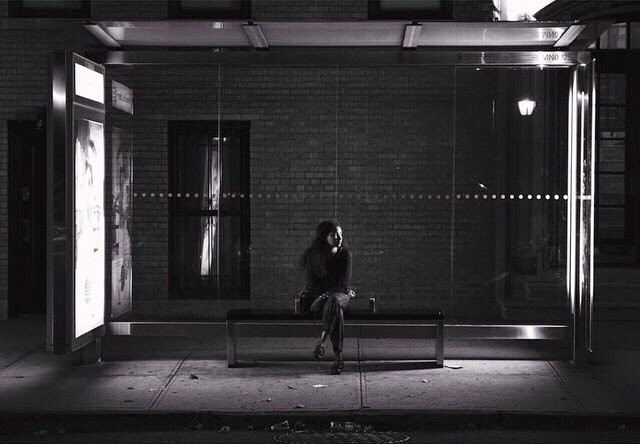 Felt like crying today in our team meeting about one of my students whose parents abuse him, even though he has a severe disability. What really hit home was hearing about how his mom was using drugs while she was pregnant with him. I remember when my mom admitted that she was so addicted to crack that she couldn't stop using it, even though she was pregnant with me. I don't have a physical disability but I often wonder if my cognitive functioning skills were affected by her poor pre-natal care. Like, what's wrong with me that I can't actually see? Or am I totally fine? I don't know .. What I do know is that I am blessed to have been able to overcome her neglectful parenting. But my heart cries for my students who have to suffer because of their parents. I wish I could do more to help them.

Bae and I had an argument this morning and it was heavy on my mind after the meeting. I was about to walk to the park and sit under my favorite tree to clear my head before my third period class started but then, I saw Jenny sitting in Gena's office. I walked in, sat across from her, and said, "All we do is argue. I guess it's safe to say, the honeymoon is over."

"So what are you saying Clay? You don't think he's the man for you?" I was caught off guard. It was such a strong question.

"He's most definitely the man for me. That's not a doubt. I just think we're at the point where we are seeing the real us. And it's tough because we love each other. We just want to understand each other. Let me give you an example: Last night, I was feeling down about life itself. Just one of those moments where I was feeling unfulfilled. I was telling him how I felt and he began to give me a speech about goal setting. I didn't want to hear that. So I said something slick and we got in an argument. I didn't want to hear no speech! When I'm upset, I just want to vent. Just let me vent! But after the fight, I called him back and we talked about the fact that he doesn't know that I just need to vent. He doesn't know that I don't want advice right now. I just wanted to be heard. I explained this to him and he basically felt like he wasn't about to just sit there and let me complain about something that I have the power to change. He's not a yes-man. He has his own opinions and wants to give advice to help me grow. I don't want him to feel like I don't need his advice but seriously, when I'm upset, I just really don't want to hear that sh't. We were on two different pages last night. Did this kind of thing happen to you?"

"Yes ..but not this early. But that's because we were 18 when we started dating. You're 28, you know exactly who you are and what you want. We didn't start seeing the real until we were married and moved in together. But Clay, you're going to have to take his advice and listen ...because that's what he's in your life for, not just to listen to you but also to help you gain clarity. You're stubborn, just like me. And believe me, him giving you advice when you don't want it is not going to be the only thing that annoys you about him. He's going to really piss you off sometimes. And he's going to do that thing that pisses you off for the rest of your life! And there's nothing you can do about it but love everything else about him. Let's face it, you're going to piss him off too! There are going to be things that piss him off about you for the rest of his life as well but the thing is, he's going to love you beyond those flaws. That's what going to keep you both going."

"Honestly, the key is to communicate. You have to have open and honest communication about everything. So keep telling him what you don't like, finding out what he doesn't like, and compromising for each other. You have to talk about these things."

"You're right. I have to communicate. Last night, we also argued about Christmas. He wants me to be with him for our first Christmas, even though I really wanted to be with my friends. I thought long and hard about it and realized that our first Christmas is important. So I gave up my trip with my friends for us. He was telling me how his friends are going to Vegas for New Years and he was thinking about going but he's not going to go. So I'm like, "Well, why aren't you going to go?" He's like, "Oh I have to do this and that and blah blah" but not ever mentioning me. So I flipped! I'm like, "You mean to tell me I gave up Christmas with my best friends and you really were thinking about going away for New Years, the time when being with your girl is most important?!" He's all cool and calm, like "Bae - you know we're going to be together for New Years, if I'm in Vegas, you're in Vegas with me. What are you talking about? And I'm sacrificing Christmas too. We both have the option to be with our friends but I'm going to be with you, not them." I'm like, "No! This was your idea to be together for Christmas not mine. You're not sacrificing, you're getting what you want. And for you to not mention us as the reason why you aren't going to Vegas on an important holiday like New Years is crazy. Don't just throw me into the equation either!" But he went on to say that he didn't think New Years was that serious, Christmas is more important. I still had my feelings but just didn't want to argue anymore. But that whole thing could've been avoided had I just communicated my feelings in the first place.. I should've just told him that I think New Years is important.. Instead, I asked him questions, hoping to hear the answer that I wanted to hear, only to be let down. That's wack. You're soooo right. Communication is key. It can help avoid all those dumb arguments."

"Yes but you don't want to necessarily avoid arguments. In order to grow, in order to learn about yourself, and learn about each other, sometimes you have to argue. Don't try to tip-toe around things that bother you to avoid a fight. The relationships where people are too quiet, something is wrong. You're two different people. You're going to have your perspective on things and he's going to have his perspective on things. Sometimes they will collide. But the best part about having a good fight is the great make up sex!"

We both busted out laughing and I told Jenny thank you. I love feeling like I have big sisters to turn to at work.

Speaking of sisters, Carissa and I talked for almost two hours tonight. We're finally getting back to where we used to be.. But I'd like to think this is a new and better version of us.. So it's not really getting back to where we used to be but more like gearing up for where we are going. Fact is, together, we're going to go far. Our best-friendship was another relationship where I had to have open and honest communication. It was hard for both of us to have such a raw discussion a few weeks ago but what was harder, was holding silent grudges for the past couple of months. I hate confrontation with the people I love. I'd rather avoid it all and act like nothing is wrong but that really almost brought our entire bond to a tragic end. After 10 years of friendship, real friendship, you can only expect two people to have their moments of growing together and growing apart... I'm glad that we both were able to put down our pride and egos. Tonight's talk was a reminder of how much I need her in my life.

Well, that's all for me.. Can't wait until tomorrow night.. Bae will be here. *Smiles*