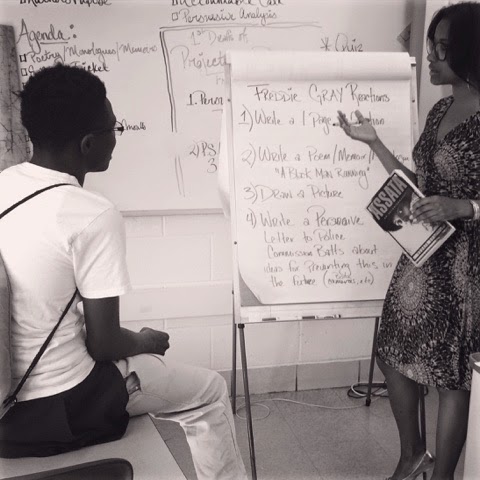 
I walked into the historic church, which has been transformed into the Baltimore Urban League building

I followed him into the elevator and told him to pardon my appearance. My allergies made my eyes bloodshot red and my face was swollen. I'm still not quite of sure why I felt the need to apologize to him for my appearance.

The tv in the meeting room was loud enough for me to hear the news. The man who invited me last week walked into the smaller room where the tv was playing. There were two other men sitting in there that greeted him.

"If the police commissioner would've listened to us, he wouldn't be in this mess, now would he?" The men shook hands to greet one another as they continued their conversation.

"Remember when we met with him? How long ago was that? ....and I had a subsequent meeting with him after ours."

"Man! I was sitting right next to him in the gala and he ran out of there saying, 'I gotta go save the city!' He must've known that boy was going to die."

I began to let the WBAL news broadcast become the b-roll of the scene. I listened as the protesters tirelessly screamed and chanted everything from "No Justice! No Peace!" to "F-ck the police!" One person had already been arrested today for protesting, while the officers who killed Freddie Gray were as free as birds, with paid leave from work.

I thought about Ahmad. Yesterday, he came into my classroom asking me about the case.

"Ms. Clay, is we learning about Freddie Gray? Is we going to read about him and write a reflection or something? We have to do something!"

"Are we... Are we going to learn about Freddie Gray?"

To be honest, I hadn't even heard anything about Gray until Ahmaud. It was in that moment that I realized how conscious-minded my students were becoming.

"Who is Freddie Gray? Tell us about him."

Ahmad had the entire class' attention, which is something that he cherished. In his years before entering middle school, he was known for being a bit of a class clown; him receiving the undivided attention of his peers in order to inform them about an important issue like this one was a true testament to his tremendous growth over the last couple of years.

"Yes ... Selling drugs..." Ahmaud whispered. "He was caught and he got beat up in the squad car really badly and they took him to the hospital and he died."

"You mixing up the story! Get the facts right! He died but they brought him back to life and then days later he died again!" Gerald yelled out.

"I know what I'm talking about! He was my cousin's mans!"

The boys began to go back and forth about the facts until I had heard enough.

"Go online and Google it, work together and annotate the articles so you two can teach us everything you learned at the end of the period."

This wasn't in my curriculum or lesson for the day but I couldn't let such a teachable moment pass them by.

At the end of the period, we found ourselves in a discussion about possible solutions that could prevent this from reoccurring.

"They should take the guns away from the cops!"

"They didn't even use guns to kill him. I didn't know you could kill someone with just your hands..."

"I think they need to make them wear cameras!"

"What's the point of police wearing cameras if Eric Garner's death was on YouTube and they still didn't get any time?" Dameone's profoundness shut the entire class down just in time for the period to end.