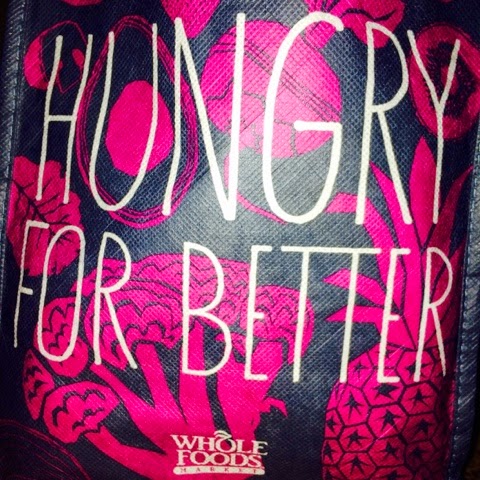 In the hood, you can't even bring bags into the grocery store. You have to check them in with the security guard. I didn't know this until I got on the line. This was my first time going into this market.

The line was pretty lengthy and there was only one lane open.

"I'm the manager, the cashier, and the custodian today honey!" I overheard the heavy set sister proudly saying this to a younger woman, holding her new-born in one hand and keeping a close eye on her two toddler sons at the same time. I still can't understand how she could be the only person working in this market with our sky-high unemployment rate in Baltimore. Surely, they should be able to hire more people.

It was so crowded that I couldn't even make my way into the aisle to get in back of the line, so I stood on the side of the last person, which created an L-shape in front of the store after more people started getting behind me.

"Where is the line? Ma'am were you next? Where did he come from? Was he after you?"

I shrugged my shoulders to suggest that I wasn't really sure of who was in front of me. Everyone pretty much looked the same from the back. Grim garments and loud conversations that I was trying to drown out with my Robert Glasper mixtape.

"He was behind me. He was here." A younger man responded to her.

"Sir, let me check your bags. What's in here? You know you were supposed to check them at the door." The middle aged female security officer began to interrogate an elderly man, probably close to my granddad's age of 80 something. His baggy jeans were clean. I could tell by their crisp crease that they had also been meticulously ironed.

He took off his green fedora hat to show her some respect before answering her.

"No one was checking bags when I came in ma'am."

Without asking, she began to probe through his black plastic bags and pulled out two cartons of eggs that leaked all over her pants. Her face became monstrous at the sight of yoke dribbling from her thighs to her feet. She was furious.

"Where did you get these from?"

I couldn't make out what he said but she began to retort with irritation and anger in her tone.

"So you just take anything from anybody? That's what you telling me?"

He tried to take them back from her with ease.

"Sir, back up. I will give them back to you when I'm ready."

"I just don't want you to crack my eggs."

I wanted to laugh but I didn't want her to flip on me. She walked to the market's manager-cashier-custodian and asked her about the eggs.

"Girl, I don't know where them thangs came from! Get that sh't out of here! What the hell!?" She was not in the mood to be a detective while fulfilling all of her other roles. After all, she was going to have be the one to clean up the unborn chickies that were creating a nasty trail from aisle number 3 to the entrance of the store. The security lady walked all the way to the front before coming back to the line.

"Sir, you can get your eggs when you leave. You know you have to check your bags, don't let this happen again."

"Well, when I'm working, it's always the same.." She gave him so much attitude, despite how sweet his slurred voice was.

I eyed her as I listened to her power struggle. She had two foggy gold fronts that barely shined behind her candy apple red lipstick. Her braids were blonde and black - synthetic hair that she clearly used rollers to set at night. Her nails were so long that they curled like snail shells, with different designs on each tip, and rings adorning each one of her fingers.

"You got it, miss lady. You the teacher and the professor and the FBI all in one...I don't want no problems."

"You is ignorant. You is a pure nuisance. Just go through the line and carry yo' self out."

She was beyond irritated at this point. Everyone behind me in the line began to laugh and talk about the old man's grill. He was missing his front teeth and had gaps in all of his bottom teeth.

"I'm ignorant but you don't even know when to use is and are. Some teacher you are!"

I broke out into laughter and I didn't even try to hide it. I can't say I felt bad for her. She was clearly bothering him because of the power behind her badge. The reason I know this is because I, too, had a {recyclable Whole Foods} bag in my cart with all of my groceries in it, as well as a bag on my shoulder, and she didn't say anything to me at all. I was proud of that old guy, he handled her biased treatment with a smile.

On my way out, miss top-flight-security was going at it again. This time with a young lady who was pitching a fit because someone stole the bags that she left at the check-in counter.

"You should've told me you were leaving them here. You..."

I walked out before I could see how the story ended.