May 30, 2015
When I took this picture of these yellow tulips in Paris back in April, I knew they were talking to me, I just couldn't figure out what they were saying. I finally hear them, loud and clear: it's been 7 years of completion in Baltimore - hence the 7 tulips that are in full bloom. But the 8th one, that closed tulip, she symbolizes new beginnings. 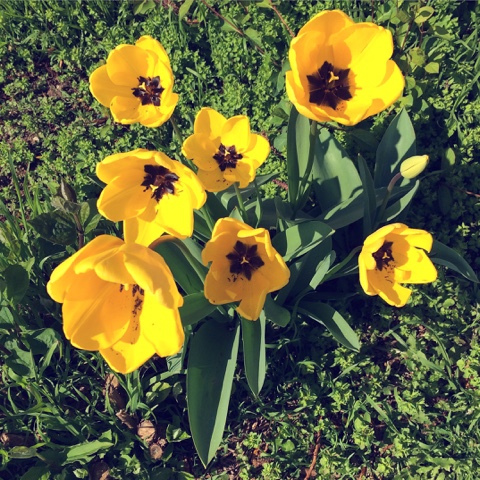 Today is my farewell celebration. Closing the chapter of pages that tell the story of work that I've completed in Baltimore. Zayn's graduation is in a couple of hours and then at the Blossom's Father Daughter Ball, I will see many of the students that I taught from my first year until my last. It is a blessed day for me. I've been letting tears of insurmountable joy roll down my face since I woke up.

When I graduated from Morgan, I planned to only teach in Baltimore for 2 years and then return home. Little did I know, 89 East Baltimore, 6th grade students would capture my heart so much that I would unconsciously decide that it was my duty to personally see them all the way through until the end. My plan to leave in 2 years went right out the window when I told Zayn's class that I wouldn't leave Baltimore until they graduated from high school. I kept my promise and he actually acknowledged it the other day when he met me on Pennsylvania Ave to give me a ticket to his graduation. He surprised me when he recalled the exact moment that I told him that I would always be here for him.

God is so good, it has been more than the word blessing can depict, to have sewn seeds into hundreds of future leaders over these past 7 years. In turn, those same seeds that I planted yielded an endless garden of experiences that taught me the meaning of respect, the definition of responsibility, and the value of self-reflecting. Above all, they helped to reveal the power and influence that I have within. I was 22, 5'2", and 110 pounds - running things like a giant at the Freedom Academy. I never knew my own strengths until I began teaching. I never knew success until I began teaching. I never considered myself a leader until I began teaching. These kids helped me to find myself, while I was doing the same for them. I never felt so fulfilled with anything in my life until I saw them learning, and not just learning but loving to learn, do well on assessments, and my all time favorite: authentic oral projects. They were hungry for knowledge and thirsty for the constructive feedback that would support and confirm their growth. It was and still is my joy to quill the thirst of my students. One would think it was Thanksgiving everyday with the way I would chef up a grand feast of a lesson for my children. I had no doubt that I was living in my purpose. Getting texts from them once they went on to high school just to say thanks for teaching me how to write an essay or thanks for always being here for me, that was the real reward. But nothing will be more invaluable than what I will experience today.

Many of Zayn's closest boys that were in his class have kids, are in jail, or worse - addicted to drugs.. He made it. Through everything he's been through with his family, moving from place to place almost every year, and not having a father - just like me, he made it. I remember the day he asked me to be his mom. He was only eleven but had an old man's deep-rasp in his voice. His other teachers would probably have described him as a rough and wild little red-headed thing but he was always respectful to me. I knew he just needed a little more attention and lot more love. I told him I could never take his mom's place but I could be his godmother. Today, I feel the pride of a mother and although he's not going to a 4 year college immediately, I know that there are great things in store for him.  This is just the beginning.

I lost touch with so many of my girls from my four years at the Freedom Academy after the district closed it down but I am proud to say that my very first set of girls: Tonique, Tyshauna, Dawnya, Asia, Maya, and Kiara are graduating from high school now too. Many of the girls that were in their class had children and dropped out of high school. I am still close to those girls that quickly grew into young mothers. I try my best to encourage and support them as much as I can. But I'll never forget the feeling that I had when I watched my Beverly's (that was our girl's group name before we incorporated the Blossoms) work their butts off in Puerto Rico, just to help others, even though they barely had anything themselves. Selfless acts of humanity. We stayed up all night while we were overseas, talking about any and everything, especially what they wanted be when they grew up. Now, they are getting ready to take the exact steps that will allow their dreams to come to fruition. In the fall they will be entering college and making me even more proud than I am right now.  Humbled to have been able to witness their journeys. I can't wait to see them tonight.