August 25, 2015
When the beat dropped, the entire crowd erupted into an uproar. I don’t know exactly what it was … maybe it was because we were in the heart of Brooklyn but even those of us who weren't natives of the “thoroughest borough" felt a sense of pride as we stood there, screaming every lyric to "My Jamaican Guy", a song her mother sings on, even though her Pentecostal father completely disassociated himself from her so that he could gain status as bishop in the church. We can definitely thank LL Cool J for his sampling of the beat. It always resurrects the spirit of a New York City summer … the good old days of 1995, when you could cop a bag of red Doritos, a quarter-water, sunflower seeds, and a pack of winter fresh all for a dollar from Papi at the corner store.

I heard someone behind me say, “She’s like sixty-something!” And I couldn’t believe it. I Googled it. Sixty-seven to be exact. Sixty-seven, rolling around the stage with her entire rump and bumps out. Excuse my vulgarity but there’s no other way to describe it. She gave us her all during that performance, literally and figuratively. 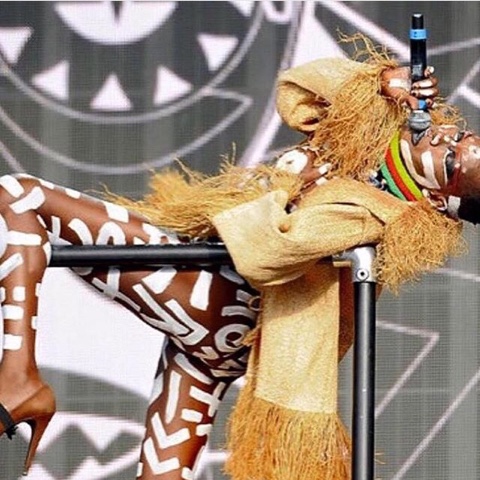 Never in a million years did I think I would be able to say I saw the groundbreaking model, Grace Jones, in real life, let alone - naked. The only thing covering her was a corset for her tummy, thick tribal streaks of white body paint, and the costumes that varied from straw skirts to fur coats in between each song.

Her energy was intense but me, being the mood-stricken woman that I am, felt myself swerving in and out of weary lane. I’m quite sure that it was the love that overpowered her stage presence and jaded my experience.

Fair skinned.
Domesticated, curly bush.
About 5'8" in her nude sling back kitten heels.
Ankle length black backless dress.
(I would’ve gone without the bra that showed the clasp in the back.)
Classic black Coach bag, not really an evening purse but it was still cute.
Navy blue Pashmina scarf around her arm.
He carried their food and a bottle of white.
Tweed J. Crew blazer, suede elbow patches.
Off-white dotted-pinstriped shirt.
Tailor-fit slacks …could've been navy …or black to match his girl.
It was dark so it was hard to tell.
Coffee colored summer-boat hat with a thin ribbon around it.
Urban classy.

Juxtaposed by a teal leather tennis skirt.
Tribal and lace mid-drift.
Symmetrical blow out with course sandy brown ends.
Her man in a tribal dashiki.
Ripped skinnies and worn red and white Jordan 1s.
Gold septums and tarnished rings upon 18 fingers.
They whispered into each other’s ears and laughed.
Ethnic swanky.

Mint green floor length 80s styled gown.
She took the fancy-dress theme very serious.
Shoulders bare.
7 strings of pearls draped around her defined neckline.
Chin length locks with sandy blond tips.
No make up.
No need.
A white Oxford and dark slacks.
Bald head.
Mandingo-black arm rested above her full bottom.
They don’t speak but they aren’t standing in silence.
Regal affair.
The sea of Black couples made me just as proud of my culture as I was over Grace Jones but I couldn’t ignore my own (I’m ashamed to say) propensity to relive moments that I cant forget. I couldn’t escape the unavoidable chasm; no matter how hard I tried. I was beginning to fall into an abyss of flashbacks. Last year this time, I went to AfroPunk with my girls but I left with my “him”. We walked over to the Promenade and were unexpectedly gifted with two, lofty cones of ice cream. The smiling brown-eyed girl behind the register let us have them because we didn’t have any cash and the card machine wasn't working. The line was long and she quietly signaled us to enjoy the our ice cream and the rest of our night. She was sweet and we added that gesture to the long list of good things that happened every time we were together. We walked along the boardwalk, had a shoot out with both of our cameras, used the tripod to take pictures of ourselves kissing in front of the Brooklyn bridge, and told childhood stories while sitting on the rocks by the water. We made a promise under the stars and lights that night, one of many that have proven to be nothing more than a mound of empty words.
I didn’t want to see any more couples, dauntingly reminding me of what I couldn't force myself to erase or at least abate from my mind… my heart… and my Spirit. Grace was about to be finished. So I went on and headed for the entrance of the park.

“PUT IT IN BETWEEN YA' LEGS AN' JUST ...” Her hefty West Indian accent ricocheted through the speakers as I reached the tip of the park’s exit. I was surprised at myself for being so appalled. I acted as if I hadn’t just heard her ask the crowd, "Can I get a damn splif?!" right before I left the park… But I wasn’t the only one who was struck by her overt candidness…

“Oh my god!” A young woman who looked the same age as me turned and shook her head in a lighthearted dismay.

“I know right! But she’s sixty-seven! She can say whatever she wants!”

“So true! I am going to be the exact same way!”

“Me too! Plus, she paved the way for so many of us, in so many different ways. She opened unmovable doors. From YSL runways in Paris to Vogue to Elle, all the way back to Whilemina. Even tonight, she pinspired us to express ourselves! She can do whatever she wants at this point!"

“Me too!” The beautiful stranger walked in the opposite direction of me before she turned to say, “You get home safe.”

I started on Myrtle and Park. I was confused by my GPS’ directions so I asked a couple of young women for help.

“This is the way to the bus right?” I’d begun following the crowd.

“Which bus?” They asked in unison.

“Ok. Thank you.” I proceeded to walk through the entrance.

“You know this is Fort Green right?” The skinnier one shot me a look that said, Girl, you do not need to be walking around here at night by yourself.

“Yea…” I lied. I didn’t know it was Fort Green. I just knew I was in the projects and that I was in Brooklyn.

“But n’ggas ain't really on that robbin’ sh't like they used to be…” The round one interjected, halfway reassuring me that I was safe.

“Sh----t…” Skinny held the ‘it’ sound in sh’t like most Black people do when opposing an opinion or in the middle of a story. “Rememba’ that Chinese lady?”

“My movah' was so mad. Cause rememba'? … I waited with the Chinese lady for the cops and told the her where everybody was when the cops came. I felt bad for her. They didn’t have to rob her like that."

"And my mother was on some dum’ sh’t like, ‘You know you can't be out here snitchin’, everybody know where we live'..."

“I don’t give a motha’ f*ck. They shouldn’t have done that to her.”

It was a quarter to eleven and a group of toddlers was chasing one another on the playground. I couldn’t pinpoint which adults were supervising them, as the only other people out there was a group of young men, all in white tees, huddled in front of the building, around their dice game.

“Well, we gone walk you to the bus stop. You can take the bus to the train or you can walk to the train… It’s up to you but we not letting you walk through here by ya’self.”

I was wearing a sparkly vintage shirt-dress, scruffy All Saints boots, a secondhand Dooney, my Nikon, and carrying Baldwin's, "The Fire Next Time".  I probably looked so out of place.

“Yeahhh, nahhh. We can’t let you go by ya’self. But forreal, you'll see a difference when you get on Myrtle. The neighborhood is really transformin'."

“Gentrification.” The round one shook her head.

“I bet we won’t even be here in a few more years yo…” She looked at her friend while shifting her black bodega bags from one hand to the other.

I decided to take the bus because it came as soon as we crossed the street. I hugged them goodbye, thanking them for holding me down. There was a shinny CVS on the corner, which gave me flashbacks of the Freddie Gray uprising in Baltimore. Duffield was like a scene out of movie. Smiling white people rode Citi-bikes in between serene trees, adorned with Christmas-like lights that raced from the roots to the top of the barks. As the bus turned the corner I looked over at the Marriott – a brand named hotel. A sure sign of things to come. Newly constructed glass buildings rose sky high. Chalkboard easels advertising happy hour specials aligned the sidewalks, while valet parking signs made me wonder: How long will it be before there are no more ‘jects?