I'm Sorry Pharell, I Cant Get Happy Over Dope 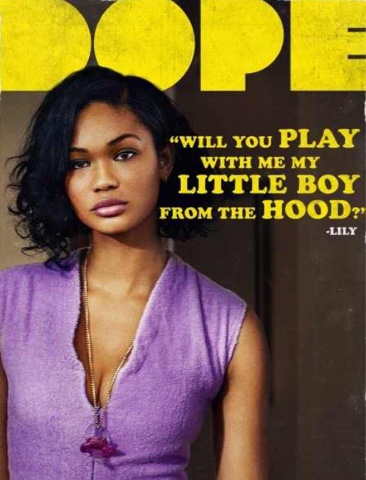 Dope is coming of age-themed film focused on the life of a young, Black, high school senior from “The Bottoms”, a small area in Inglewood, CA. Malcolm (played by break-out star Shameik Moore) and his two best friends, Diggy and Jib, are often bullied for being nerds who act “white” in their high school, an environment that is so violent they have metal detectors and a narcotic-detective-dog at the entrance. Diggy and his friends are constantly faced with hurtles that stereotypically hamper the lives of all youth that live in “the hood” e.g.: They have no other choice but to walk home from school through a gang of Bloods and risk getting their belongings, such as Air Jordan’s, stolen.

One day on his way home from school, Malcolm is approached by Dom, the neighborhood’s leading drug dealer (played by A$AP Rocky). Dom did not ask him if he wanted to buy or sell drugs but instead, he summoned him to send a message to Nakia (played by Zoe Kravitz), asking her to attend his birthday party. She agreed to go, as long as Malcolm went too. As viewers, we get the sense that Nakia has a crush on Malcolm, even though she is Dom’s girl.

While the party is going on, Dom and his drug dealer friends, one being played by Young Money rapper, Tyga, are exchanging money for powered molly. The exchange is interrupted by a police raid, in which Tyga's character, the drug dealer that was of a higher rank than Dom, was shot and killed. This scene was interesting because prior to the raid, the young drug dealers were siting around, casually talking current issues involving global politics such as drones and the Middle Eastern wars.

As a result of the drug bust, Dom was taken to jail but not before he could place the powdered molly and his gun into good-old-nerdy Malcolm’s book bag. Malcolm never even noticed until he got to school the next day. He thought he was going to get rid of the heat within a few hours, until Dom calls from jail and tells him that whomever he spoke to about giving the drugs to was either the ‘po-po’ or worse, a snitch. So the plot thickens as we find Malcolm with the life-threatening dilemma of being fiercely chased by another Black male for the drugs (as viewers we never find out if the man is a snitch or the jakes) even though he is supposed to be preparing for a meeting with a Harvard man who is also from “The Bottoms" and will be writing him a recommendation letter to the university. Ironically, the same man that he was supposed to meet for the letter turns out to be the kingpin of the drug game in Inglewood. The camera pans to a framed picture of Dom and other neighborhood kids from the Boys and Girls Club on his desk.

The kingpin, AJ (played by Roger Guenveur Smith) denies being involved with the drugs when approached by Malcolm. Instead of taking what belonged to him, he advised Malcolm to figure out a way to get paid for them and to bring the money to him when he was done, in the same way that Dom would have, had he never been locked up.

Malcolm figures out a way to sell the drugs. What other choice does he have, right? He could take them to jail but then he’d risk being mistaken for being involved with them and get arrested... Or even worse, he could take them jail and then become known as a snitch... we all know what happens to snitches “in the hood”. So Malcolm, being the intellectually savvy geek that he is, with a little help from his white hacker friend, saves the day by using this super technological ‘Ebay for illegal items’ type of computer app and sells the drugs to rich white kids, leaving no trace of the money or the drugs to him self.

In the end, all is well. His mom never even suspects a thing. Dom comes home from jail and retrieves his gun. The kingpin is content. Nakia gets her G.E.D. And Malcolm gets into his dream school, Harvard.

They all lived happily ever after. 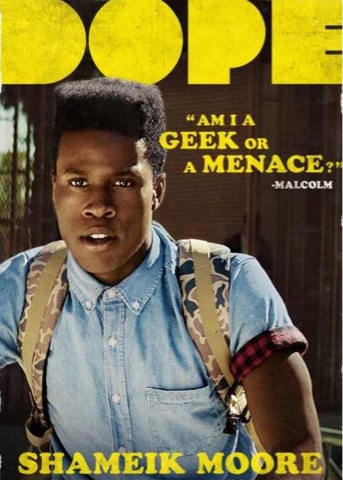 It’s been about two weeks since I saw this movie and I still have the same questions. I mean, I get the overall messages that we were supposed to walk away with and feel happy about: no matter what, be yourself… or, even a Black kid from the hood can go to Harvard. That’s fine. I have no problem with that. But I cannot move away from the contradictory perceptions that were perpetuated throughout this movie. Maybe some of you will have the answers to my questions...

•Did the author choose to name Malcolm after Malcolm X? Did he want us to remember that all Black men can be highly intelligent and successful but first they must go through their rights of passage, partaking in illegal activities to get their street cred? This is just like Malcolm X, right?

•The producers of this movie are some of America’s most prosperous Black men. They must have purposefully wanted us to understand the truth about successful Black men – they are all just like the principal and the Harvard entrepreneur, who do not encourage and empower their young brothers but instead, demean and exploit them?

•What’s wrong with white people using the N-word? If every song on mainstream radio has the word in it, and they sing it when among their peers in parties and such, why can’t they say it in front of Black people too? Didn’t they invent it? They should be able to just say it whenever they want and not be questioned about the use it? How can this still be so offensive to Black people?

•Aren't using drugs like molly really, really fun!? Shouldn’t we all be doing it? Doesn’t it just solve all of life’s most complex problems? Shouldn’t we tell our boys to sell this instead of weed, crack, or heroine, you know, since they wont get caught? They can actually write an essay about it and go to an Ivy League university after all is said and done! I mean seriously, why is the government closing more schools and building more jails for the increasing number of Black men who will do time for selling drugs and carrying weapons? Why don’t they just sell the stuff using a secure and private iPhone app which will ensure they will neevvverrr get exposed, make just enough money to get their necessities, and bow out of the game so that they may go off to college? It’s simple!

•I am so confused about this: Is it a stereotype or is it reality that a person can’t walk through their own “hood” without getting something stolen from them? Is it funny or is it sad to see a 15 year old get stabbed to death over a cell phone. Wait, sorry, that happened in real life last month. Let me stick to the movie: Is it funny to see a group of young Black and Brown kings, running through the halls of their school (instead of being in their classrooms learning something) fighting to the death over a pair of sneakers? It has to be funny. Everyone in the theater laughed. The violence in urban neighborhoods and the chaos in urban schools is just one big fat joke. Why aren’t you laughing too?

•The writer implicitly implies that Dom is actually intelligent in the subjects of Math, Science, and Social Studies. He even seems conscious enough to say that what Obama is doing with the drones is wrong. Why doesn’t he feel this way about poisoning his on hood with drugs? Oh, I forgot, the wars in Pakistan, Yemen, and Somalia are totally different than the war on drugs – they are real. They matter. Right?

•And lastly, do all thugs become hall monitors? I was really happy to see that Stacey, a character we all grew to love in a movie that also took place in The ‘Wood, made it out of the streets and into the neighborhood school building, keeping the kids safe and sound.


I know my questions are quite snarky but honestly, it was a decent movie. The production was innovative and I really appreciated the soundtrack. I loved the theme of embracing your individuality and the notion of it being way cooler to be smart than it is to fit in. But at a time when the dehumanization of Black men is at an all time high, I have to say, I just don’t think some of the events that were placed around the main idea were appropriate. Despite its cute and positive messages, it’s not what I believe we need to be showing our youth or anyone outside of the Black-American community. It leaves viewers with too many stereotypes - stereotypes that we as a people should be combating, not coaxing. In the words of Roxane Gay, “There is little room for error. For some young Black men there is no room for error at all.” She is absolutely right. This is our reality. The only thing I found to be closest to what actually exist in some of our most crime invested communities right now was the part when Tyga’s character was killed by the police officer during the raid.