Made in Her Image 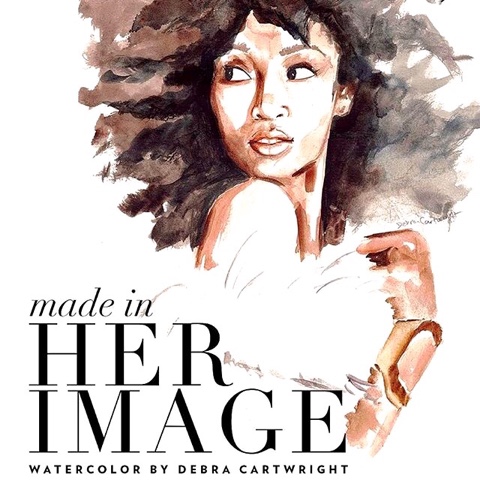 I analyzed the crowd: High class. High society. A cultured Black folk. Walking canvases. Unique forms of self-expression through fashion. Uncountable shades and sizes of women with voluptuous hair and shamelessly flowing dresses filled the capacity of the gallery. Fluorescent tribal patterns, hot pink backless maxis, and floral denim body-cons. Six-inch-high heels and summer flats. Three piece suits, shinny dress shoes, and fedoras with feathers on the side were worn by the older gentlemen who stood around, laughing and making the younger women blush with their respectful compliments. I could appreciate the balance of Louis Vuitton bags, Versace frames, and staple second-hand pieces. Laughter and sophisticated conversations gave the Sol Studio on Adam Clayton Powell and 124th a classy climate with just the right amount of sex appeal on this warm, mid-August night.

A bottle of Chardonnay on ice, white popcorn in a large crystal bowl, and a pile of price lists were perfectly placed on the long, white, rectangular table that she stood near.

“Can I just tell you?! I follow you on Instagram and I just had to come and meet you! I absolutely love, loveee, LOVEEE your work!” A young lady spoke rapidly, maybe a little nervous, most likely just in awe. From afar, I watched the modelesque Deborah Cartwright to see how she would handle her eager fan.

First, she smiled. “Thank you so much.” Her words flowed with a placidness, which from a distance, could have been mistaken for being a bit diffident; but in all actuality, it was more of a mysterious air… a self-assured and graceful demeanor that made her the cool, mysterious chick that everyone wanted to know. She remained composed as she continued to look the young lady directly in the eyes, listening to the ravishing critiques of her watercolor pieces.

“Are you a writer?” A young lady asked, removing me from my introverted zone and inviting me to join her circle of friends.

“Well, I am a teacher but I have a website for my writing. I wanted to do a story on this event. I love Debora's work.”

“You know her?” The girls were genuinely amicable.

“No, I started following her a while back. Alex Elle posted the ‘Don’t Shoot’ picture that she painted after the Mike Brown verdict was released and I’ve ordered pieces from Etsy and featured her work on my website since then.”

“We’re her best friends! Would you like to meet her?!”

Wow! I thought. Of all the people I could meet at this event, I run into her best friends.

It took a while to get to her because so many people were approaching Cartwright with congratulatory embraces. As we waited, Alexis and Kendra began to tell me more about their sister-friend.

“She’s from Annapolis. Her sister works in finance. She influenced her to really take her brand and herself seriously. You have to take ownership of what’s yours, you know? Because if you don’t, someone else will.” Alexis’ words resonated deeply within me.

“…she’s just so vibrant, so humble.” Kendra added, right before Cartright’s mote of space was free enough for her to began the introductions.

“…and this is Valencia, she’s a…” Kendra’s voice faded under the music and I couldn’t hear what was said to describe me.

“Valencia, what a beautiful name.” At first, Cartwright smiled as she headed toward me but when she got a clear glimpse of my face, she paused.

“Wait…” She lifted her hands and put her fingers through her full, brown, curly bush in a gesture that showed me that she was trying to remember something. “I know you! You’re so cool! Seriously, you’re doing some good stuff!”

I was taken aback. She knew of me from Instagram. We spent a few seconds trading mutual compliments of love and admiration for one another's work around restoring our culture, before the owner of the Sol Studio called for everyone’s attention.

He reintroduced her to the guests, mentioning her honorable graduation from Parsons The New School for Design and her recent work with McDonalds and Essence magazine, to describe how quickly she is rising to the pinnacle of the art scene in NYC. Without a microphone, Cartwright began to thank us for coming to her first solo show and explained her inspiration as an artist.

She was poised as she began. “I went natural with my hair about two years ago. I wanted to create pieces that are like my diary. Every piece in here is a raw diary page to me...” We were automatically captured by her vulnerability. “I wanted to encourage myself to continue going natural. I wanted to feel beautiful and feminine … I work in the media during the day and I just see so many images of women with straight, long, flowy hair in fashion … and even in fashion through illustration. They say we need to create the images we want to see, so I did that.”

She went on to answer a question of one of her guest who wanted to know if any of the images were, in fact, made in her own image. “No, none of them are me.” Yet as a viewer, we can see that each of those images is of her, while collectively being of all women of color as well. Cartwright invokes a refreshing level of pride in us Black women. She is redefining the images that we see of ourselves in media by depicting us as truly beautiful, truly powerful, and truly queens. 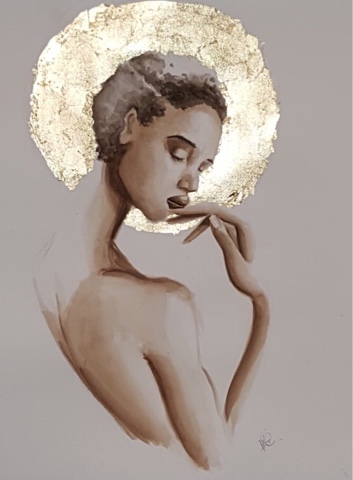 *You may visit the Sol Studio from now until September 12th to view all 23 paintings in Cartwright's collection. For more information visit:  thesolstudio.com or DebraCartwright.com
Art Black Love Feminism Harlem