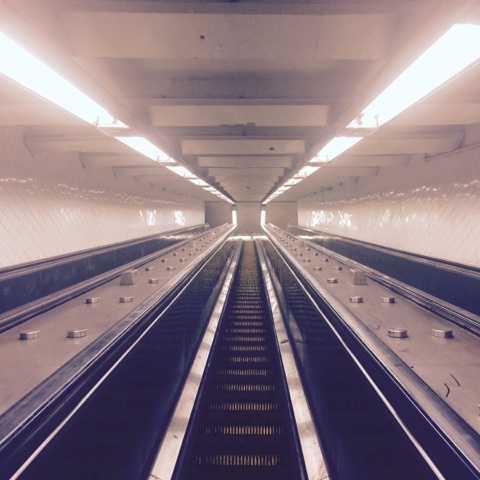 I always walk to Kendrick or Kanye.

I didn't have my headphones in my ears yet this morning so I was blessed to hear the mother reading a picture book to her son on the steps in front of the building next door to mine.

Turned the corner.
Put on Kendrick.
For Sale Intro.

Stopped playing by the time I got underground. Somehow, Spotify has unsaved my offline playlist.

Switch to iTunes.
Play Coltraine and Ellington.
In a Sentimental Mood.
Rehearsing my lesson in my head. Looking out at nothing and no one in particular until a pretty little mahogany skinned Dominican ballerina girl with dark almond-shaped eyes walks clear into my view. She's followed by her mother. A taller, wider, middle-aged version of her. They stop. Baby girl stands in front of mama, still facing me. Mama lifts her arms behind babygirl and begins to fix her daughter's jet black, high bun. Hair so shinny. But there are fly-aways. Mama licks her fingers and uses the saliva to smooth baby girl's edges.
Okay.
Now.
It's perfect.

A salt and pepper long-bearded father wearing a plaid green shirt and worn Sperry's holds his son's hand. The son was wearing a green YMCA camp tee shirt. They stop near the yellow line and play a hand game.
Father is 6 feet tall.
Son is probably 6 years old.

African breakfast.
Fluent French is exchanged from their mouths to my ears. I smile at the Nigerian father, wearing a black suit and tie, firmly gripping his son's little fingers as they walk toward me then past me.

I reflect.
New York City children have mothers and fathers now. Many of us didn't have that when I was on my morning commute. Great aunts held my hands on the train. Sometimes my friends didn't even have a hand to hold. Untamed hair showed signs of neglect. Tethered Chuck Taylor's.
Dingy bubble coats.
But we were all going to eat.
We had free breakfast and free lunch. Guess I was a Title I kid. I never asked why some of my friends had to pay $1.60 and some didn't. I'm not even sure if I thought about it. But maybe I did because I knew that only project kids like me and Nique got to eat free. Kids from the Hills like Mel used my name when I she didn't want to pay. I know she had money though. She spent it on a Snapple and dollar fries. The Jewish kids always brought their own lunch. The Mexicans ate for free too. The lunch ladies were Mexican too.

End commute.
More than just a morning journey.
More like a transcendental path from being a welfare case to teaching kids who receive the same benefit card that I had just a decade ago.
I'm home.
Journey Reflect