The Same Harlem Girl that You Used to Know 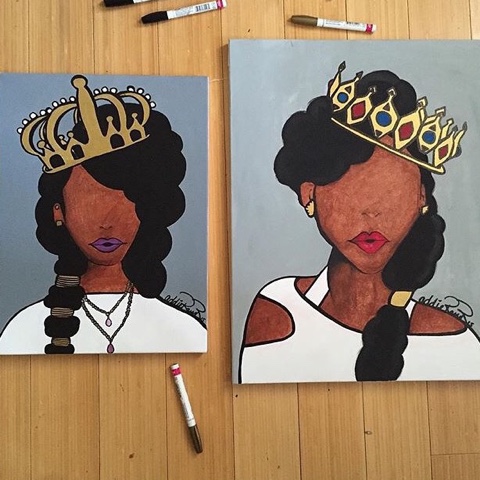 I was on St. Nick. It was a little after 4:45 and I about to walk toward the A train when two heavy set black girls stopped me, asking me to get them something to eat.

"We don't have no money but if you don't believe us, you could just buy us something to eat."

"Let me ask you something..." I said. "Tell me how you asking for money when you have lashes and twenty-inches down your back?"

"We..we..we not.. we not homeless or nothing." The other girl, wearing a red mid-drift letting her potbelly hang all the way out, battled with her stutter as she talked. "We li..live in the same fo-fo-foster home. We don't do this everyday but our foster mother ain't gi..gi..giving us no money." She exhaled.

"Obviously somebody is giving you some money if you can afford to buy tracks and get acrylic. Don't play me girls."

"These is premium tracks..." The first girl attempted to explain the difference in hair and cost, as if buying the cheaper hair made it more acceptable. I didn't even acknowledge her statement. I went on with my interrogation.

"I'm 20. I'm almost 21 and then I'll be discharged. Then I wanna get my own apartment and get my little sister and let her live with me."

She was so tall that I found myself standing eye level to her breast, which I could see the majority of through her sheer shirt.

"You not in school?"

"No but I want to take up cosmetology. I just can't right now. I'm trying to find a job."

"You're not going to find one dressing like that."

I hated that I said that even though it was the truth. But still, I hated it because I knew the reality was that no one was teaching her any better. No one was telling her how to budget her money, how to dress presentably, how to apply for financial aid to get into cosmetology school. She may have no idea that foster kids can basically go to college for free in New York. I remember not finding out that I could've went to college for free, based on of my foster-status, until I was mid-way into my freshmen year at Morgan. I hated that no matter how much one may do for the youth, there are still so many more lost kids they aren't getting what they need and what they deserve. Just from this encounter with these two young ladies, I could name a slew of things that they have not had exposure to but the most predominant factor was that they are unaware of how to  access a different world. They don't even know there are keys for them to open new doors because they probably don't even know those doors exist.

"Not sure how much of this story I believe but I'm going to adopt y'all. Not physically of course but we have a program for young girls and I want y'all to be involved. Y'all need to be mentors to these younger girls, no one can help us like us." In this very moment, they are far from ready to be anyone's mentor but I know the power of being watched and looked up to by younger girls. "Would y'all want to do that?"

"Sort of but better. This is just for us girls."

"We used to have big sister mentors but they fell off."

"Nah this is life long. It's different. You'll be a mentor to middle school girls but first you'll have older women be your mentor. Not to knock your foster mother... I'm really not sure whose been guiding y'all thus far... but I'll tell you this, y'all not about to ask me for money and think I'm just gon' let y'all stay out here on the street begging everyday. My mother wasn't around for me either. Y'all story ain't no different than me and my sister's. I made it, so what that mean?" I answered my own question. "Y'all can too! There's no reason you should be on the street like this asking for food. But y'all asked the right one today!"

They smiled and laughed a little. I'm sure they didn't fully comprehend exactly what I meant by saying that last line but they will come to learn soon enough. I took their number and gave them mine, in addition to enough money to get something from Popeyes.

I walked away and all I could think to myself was, here you go trying to help everybody again. But what else could I do? These are the same Harlem girls that I used to be or that I could've been, had I not gone away and received a higher education. And I didn't do that on my own; the older women in my community stepped in and supported me. I'm blessed to be in a position where I can reciprocate what was given to me. I do not believe that it was a coincidence that I was approached by them today. There is no such thing as incidental when it comes to this.
Build Journey Love Mentor Photo By Addierawrrr Reciprocate Reflect