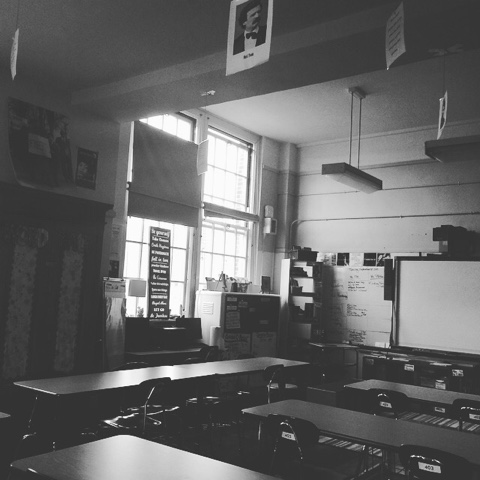 I didn't take my obligatory first day of school selfie to show off my Michele Obama-esque vintage dress, I didn't take pictures of the kids while they were grappling, I didn't buy a fresh bouquet of flowers for my desk. All I did was soak it all in.

I stood in front of the rectangular tables that were set up with name tags, free-lunch barcodes, and sign-in sheets for the students. The heels of my old, black, Enzo pumps that I bought on sale in Marshall's about 4 years ago, slightly leaned on the blacktop of the netless, graffiti-tagged basketball courts, which serve the school house during the day and the public housing residents at night. I stood in a daze for a moment. Gazing at each of the towering project buildings that boarder my school. I gave much thought to their purpose. I knew why they were built, strategically placed between Frederick Douglass Blvd. and Adam Clayton Powell. A place to hamper the poor people, the Black people, many of whom migrated from the South - like my grandmother who dropped out of middle school at the age of 13 - the same age as my students - to leave North Carolina and work on a sleep-in job up north, cleaning and care-taking for rich white folks.

My new school is old. Originally named after Countee Cullen. I wonder will a school ever be named after me? Some believe he was born in Baltimore. I used to live there. He was writer. I write. He was a Gemini. I'm a Gemini. He married WEB DuBois' daughter. I wonder if I will marry the son of an activist? ...

I wish I worked at Countee Cullen but I only work inside of it. My school has one floor of this old building. It's been cut into many schools, and it's funds have been reallocated. Like most of the public schools in urban cities, higher budgets are given to charter schools with so-called progressive and innovative curriculums that promise to close the achievement gap and save our youth, in ways that the neighborhood schools have failed to. {Hope you read that with as much cynicism as I wrote it with.} But it can be argued that the neighborhood schools have been deprived of the resources that could empower both the teachers and the students. Without the proper funds and resources we can only expect drop-out rates and low reading and math data to continue fluctuating. But somehow, there is money and a plentiful set of resources for schools to be able to run inside of failing schools.

I hate it. Business tycoons are capitalizing off of our children's high needs, disingenuously claiming to care for the betterment of America's "minority". I love my job but abhor being a part of something so controversial. Shouldn't all of these talented teachers and I be helping to better the neighborhood school that we work in. How dare we?

I scowl as I look over at the smiling faces of the teachers who have no idea what I am thinking. I question them, in my head, in the same way that I ask myself: What is your purpose? I don't answer myself yet because I begin to redirect my thoughts to the creation of the projects that surround me from left to right. These buildings serve a concrete purpose... Each of our integrated but single-race populated schools has a purpose. Legal institutions of carefully conspired plans to ensure that we, as a people, remain inadequately educated. Are charter schools a part of the same ploy as the projects? Is it absurd for me to begin making comparisons and connections to the systematic arrangements of privatized jails? Same concept, different hustle? ...or nah?

But I see beyond the politics. I mute my own newfound-reservations (after all, of all eight of my years in the classroom, none of them were in traditional schools; all 3 of them phased out "failing" public schools). The question of the missions and motives of charter schools grows more irrelevant as my new students enter the court, exchange hugs, and rush through Countee Cullen's mural-covered double doors.

They are beautiful Black and Brown children. Some so dark, I just want to touch their skin. Their faces look so smooth. So shinny. Soft as the oil that people die for in the Middle East. Judging by the area in which the school they attend is located, they may not be affluent but they share stories of summering in Senegal, Ghana, and the Ivory Coast. I'm in awe. I've been to Africa but not there. For the first time, I'm meeting children who have been exceptionally exposed. "It's so different there. You have to get used to it at first." High, full, round ebony-mahogany cheek bones and dimples cover my classroom's carpet. Not one of my girls has a weave. Blow outs, ponytails, braids, head wraps, and hijabs. No make up. No heels. No tips. Just a few name chains.

"I heard about the English teacher you had last year."

They giggled like it was cute for them to have ran off that young, white teacher for America.

"Well, you know how y'all are required to read 50 books? I'm going to make that 100. We have a lot of work to do to make up for what you missed last year."

I gave them a moment to react. I knew they would be mad but I also know that deep down, they are craving more than what they want their peers to think.

"We can know authors without reading the books."

"You can name them without reading, yes. But you cannot know them unless you read."

"Ohhhhh!!!!" The class felt like it was becoming a game of dozens.

"Yeah... but she reminds me of Karruche."

It was a complement. I think.

"Do y'all want to practice that transition again?"

"Stop asking her questions! I don't want to do it again. Let's lead by example!" His round body was not intimidating but his peers listened to him as he pushed his chair in and walked swiftly to the door. The pretty Jamaican girl with the most enticing hazel eyes stopped asking me so many questions and followed suit.

"I will tell you all about me but not today. Today we have to hit the learning target: I can explain the norms and procedures of my English-Language-Arts and Social Studies class. If we moved our names on the self-assessment trackers, where would we place ourselves?"

"Not yet met." They sang in unison. I smiled. They were picking up my routines fast.