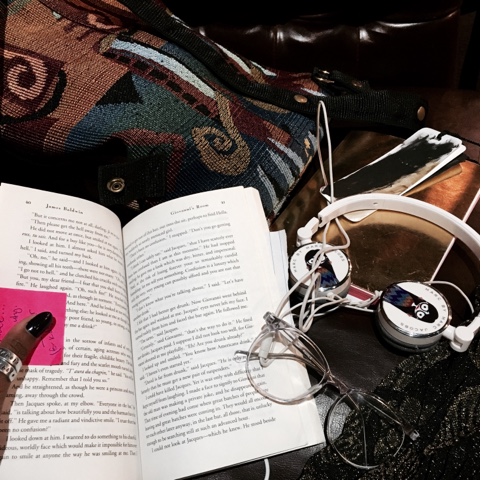 There was a loud white girl sitting in my favorite spot on the tufted leather sofas. The leather one  across from her was open but she was too loud for me to sit near her. I actually went as far away from her voice as I could.

Found myself lost in "Giovanni's Room" until I overheard her talking about how much she loves the neighborhood. That's when I looked up and realized, I was only one of 4 people with brown skin in the spot for the last two hours.

Almost every seat was filled with presumed descendants of indentured servants, whom I could imagine passing down family stories that could be traced back to Ellis Island. Avidly working, typing, sipping lattes, and not noticing me reading Baldwin, an author who wrote so many poems and stories about how their people would never come to the very place that they have found solace...

A few hours went by and just when I thought I was in SOHO or LES, the hood came bursting through the glass doors.

The daughter, appearing to be about 6 or 7 years old, went unanswered.

"Girl! He gon' act like he ain't hear me! Bullshit!" She wore a jet black, asymmetrical, bang wig that was as subtle as her painfully crackling voice. The whites began to eye one another as they pulled their headphones out of their bags.

"Maaaaa!!! Come on! Sit downnnn!" Two puff-puffs in her hair, carrying a Doc McStuffins bag and a white Barbie doll. She was cute to the eye but disrupting to the ear. Her squeals echoed and bounced around the exposed brick walls, yet, she was still ignored. The mom resisted her daughter's pulls of her left hand, held her phone with her right, and proceeded to order a coffee.

"Girl, it's empty in here! Where everybody at!?" The waitress was about to answer her when,

"Don't you see me talking?"

"But mommy, I need a bo-bo... I want you to come sit down so I can get one out of your pocketbook." She calmed her voice in a mannered way, knowing that carrying petulance in her tone would not get her what she wanted.

Any other time, I would be embarrassed and angry on behalf of all Black people - thinking, Girl! Get her out of here, screaming in this quiet white place about that damn bo-bo! But little mama's sense of urgency to fix her doll's hair was such a beautiful and rare reminder of how innocent and trivial our greatest worries are at that age. The mother's intonation, on the other hand, was a different kind of a reminder. It was the revivifying news that we are still in Harlem, America's first Black Capitol. And we are loud and proud and all that!

The mother looked back at me as she sat down to search her MCM bag for a bo-bo. "I love that skirt." She was still louder than she needed to be but I appreciated it.

"Thank you..." The white girl that was way too loud earlier looked up at me in disapproval for adding to the parade that we just found ourselves in. I smirked at her with a feather of cynicism. "I appreciate that coming from you. And your little girl is the cutest."
Black Matters