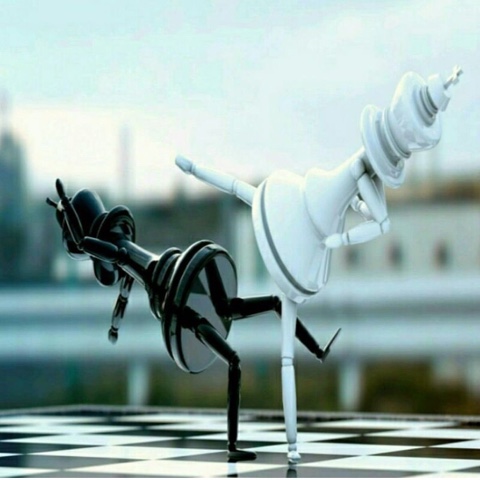 The two chess tables and wooden benches outside of the metal-gated park are usually occupied by dusty old men, drinking coffee and eating corner store chips, arguing over spades or who stole somebody's lighter.

Today it was different. A woman, probably a few years younger than me, was sitting on the bench in a pair of skin-sucking black jeans and scuffed, tan Tims. 18 inches of yaki hung below her breast and a green-streaked swoop, like Aaliyah's, covered her right eye. She kept a steady gaze, not even November's hardest breeze could get her to blink. Very dark-skinned. Soft features like the Senegalese women that twisted my hair on 116th last weekend.

Like a vicious dog's bark, I could feel the intensity of his words palpitating through me but I couldn't understand a thing he was saying.

I almost ignored him until she snapped out of her daze and looked directly into his sooty eyes.

"Well, if you put'cha hands on me again, Imma scream and tell everybody! You ain't a real man. A real man don't put his hands on a woman!"

His arms flew into the air as he rushed toward the cemented chess table. Throwing her body into her lap she screamed between her knees, "DONT TOUCH ME!!!"

"F^CK YOU!" His accusations lifted her from her protective shell. "Don't put'cha f^cking hands on me again! You a fahvah! Go hit ya' daughter!!"

My ears fell from my face. I could no longer hear either of their words but the vibration was uncontainable. My stomach churned sour milk; but more than sick, I felt a muddy cloud of fear ready to burst hard seas of doom, when I turned around and noticed the four fifth grade girls watching the entire scene, along with everyone else on the block. I said a quick prayer for the impressionable minds of the girls to be sheltered from the possibilities of such a baleful storm. Seeing this now might make them think it's acceptable later.

"...she dumb for letting him talk to her like that..." The janitor swept the reminisce of summer into his dust shovel, just steps away from the Black king and queen, who had themselves mistaken for mere pawns. They were completely mistaken and their rage was completely misdirected. Neither of them realized that they are on the same team. And everyone on the block, including the janitor, is also apart of this battle. "...she just dumb."

I looked at the little girls again. Thankfully, they followed me in.
Black Matters NYC Reflect