"Everybody want me to be calm! Do you know how them bullets hit my son?!" 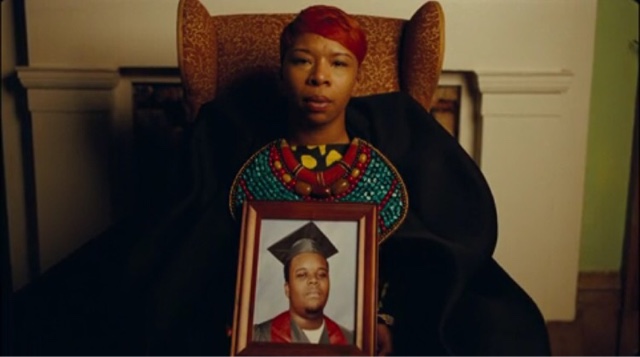 One of the most powerful aspects of Lemonade: When that tear rolled down Mike Brown's mama's cheek as she sat in front of the camera, holding her late son's framed picture. It took us back to the night of verdict - her relentless display of agonizing pain, when she screamed in front of the crowd - a fist-pounding, jaw-clinching crowd of fighters who were tired of seeing their people, my people, gunned down like dogs.

"Ain't nobody had to live through what I had to live through!" She went on, speaking directly from her soul and not one person watching that night, whether live in Ferguson or via CNN, could listen without feeling even an ounce of her wound. By the time she was done, the crowd went from screaming, "No justice. No peace." to "Burn This B'tch Down!"

Beyoncé also included Trayvon Martin's mother and Eric Garner's mother. A lot can be said about these images but what I appreciate most is, in showing their grieving mothers, she is HUMANIZING the Black man. As a people, we are still very much disenfranchised and oppressed by a government designed to keep us chained, underground, and unaware - by any means. The only way for us to free ourselves is to FREE OURSELVES. We have to be the ones to redefine the narrative of both our men and our women.

I think Beyoncé is cognizant of the notion above but at the same time, let's be clear, she did not only insert those images for those of us that understand that Black lives matter, she intentionally included each of them to wake up the minds of the very people who never would have looked at our fallen men as men, those who don't consider the feelings of the Black mother when they shoot, lynch, and burn her sons, and those who don't give a damn about another fatherless Black child seeing their daddy killed at the hands of those who were supposed to protect them.

So much of the heartbreak and disappointment-baring songs, the feminist-empowerment anthems, the emphasis on the struggle of the Black woman - backed by the Malcolm X quote was so necessary; even the low-key signs of the Santeria rituals resonated with me after watching and listening to this album for the last few hours on repeat. But nothing makes me more proud to be a witness to the conscious level of maturity, that Beyoncé has been outwardly displaying since the SuperBowl, than the homage to these mothers. They are not just clips, they are the reason we have to continue fighting for our movement, everyday.