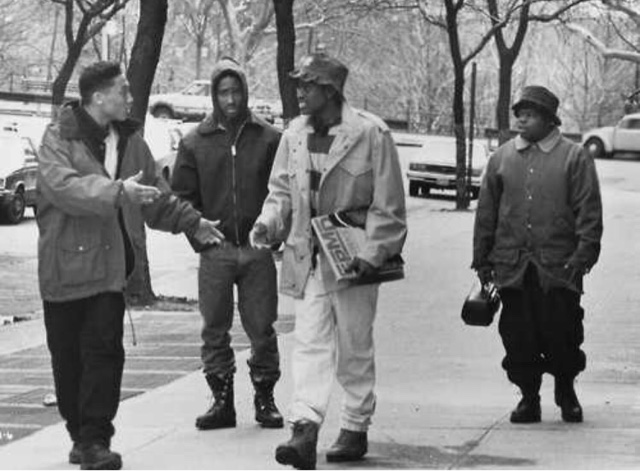 "What is going on!?!!" were my exact thoughts when I caught my 8th grade boys outside of school, standing on the corner this morning. They were almost 30 minutes late, skipping homeroom, parlaying and shooting the foggy morning breeze with their arms around a couple high school girls. The girls were almond-eyed, bone-straight back length haired, fully built Dominicans. Everyone in the group was twice my size.

"Good morning beautiful." I said one to of the girls. She politely responded, "Good morning." Nervous in her stance. "These are my boys, I have to take them inside with me." I kindly moved the tallest one's arm from around her and they all followed suit. They didn't even say goodbye. They just walked behind me, down the block, and into the building. I felt like a lame when I broke up the cute little huddle because I can remember those days. But I loved the fact that no one questioned me.

"Sorry Ms. Clay" one of them said.

"I'm not mad at you guys," I looked up at this 6'2" Mexican boy who was almost a man "but remember, the longer you spend on the streets now, the longer it will take you to get out of them when you get older." Sounded like an after school special.

"Ms. Clay!" A different kid, shorter but still taller than I am, moved through the crowd of boys until he got near me. He must've realized how frantic he sounded because of the way they all looked at him, so he casually threw his arm over my shoulder and let his voice drop a few octaves. "They tried to say I was smoking weed and hookah in school! They called my moms. That's why I was blowing ya' phone up on Friday. I needed you to tell my moms I was in ya' class all day. She ain't believe me."

"Hookah?" I heard the rumor about the weed but not the hookah. And he was in class all day but his track record of being in the wrong place, doing the wrong thing spoke louder than me as an alibi.

"Yea and now my mom got a drug test, she got it the on the dresser in her room. I ain't take it. I went to sleep."

"You trying to avoid it. You ain't slick."

"Well explain that to her before you take it."

"Nahhh, she gon' kill me! I already drank mad water."

"Not going to help shorty." I held in my laugh, he really thought that drinking water would wash it all away.

"It takes like 30 days to get it all out of your sys.." I remember learning about these kinds of things in 8th grade health class, a class my current students don't have.

There couldn't be a worse timing for him. He made honor roll for the first time ever and was awarded in front of his step-dad last week at the ceremony. After all he's been through this year: seeing his dad get locked up, his grandmother passing away, his brother getting 10 more years added to his sentence... I thought bringing his grades up was a sure sign that he would continue to build on this momentum.

"Is smoking wrong? Ain't it legal in Colorado?"

"That don't stop them from selling it to us. A lot of people smoke Ms. Clay. Im not gon' say no names. They not in your class though."

"If you can't tell your mom, then you shouldn't be doing it."

"So what's the difference between you and him?"

"I don't do things that he did. I come to school everyday. I don't get in trouble as much now! You know that! She keep comparing me to him. I'm not him."

"What?" He smirked at my straight face, knowing I wasn't going to give him advice. He knew me enough to know that I didn't mind taking all the time that he needed to grapple through the silence until he figured things out on his own.

"Let's make a list of things that you can learn from him. Things he showed you that you should not do, that he did. Kind of like our gratitude lists but with a twist. He's your greatest teacher."

"Nah son. The lessons his life has created for you will reveal themselves for years and years to come after you leave my class. Learn from your pops. Just like I learned from the absence of my mom and my pops too."

"Love you too but y'all still going to have detention for being late to school. I'll see you at lunch."