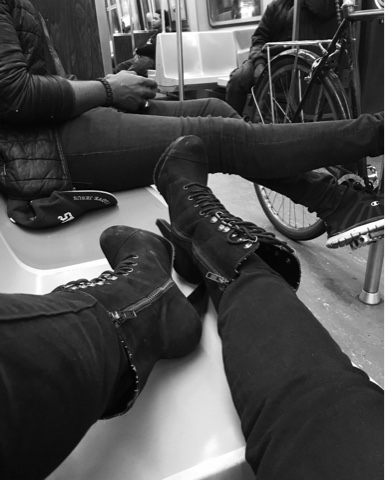 It's 3:25 AM. Went to a party out here and thought of you most of the time. Music was good but I didn't want to dance with anyone. My friends are silly and super carefree when they are drunk; maybe I'm maturing, but I was really chill and not in the mood to sing loud and be seen like I used to. I wanted to remain low key in my 6 inch heels, silk blouse, and high hair-bun. They both had guys in the party, Shelly's BF and Meekz' main n'gga .. And I was solo in my two step. I turned and looked behind me and saw you but it wasn't you. I wanted him to be you.

It's 3:27 and its been maybe about 10 minutes since I've been waiting for this train to come at the Clinton-Washington stop. Should've Ubered home. Or should've stayed home all together. But since Meekz' mom passed I've been making a real effort to be around more. I find myself in BK at least twice a week. Which may be part of the reason I think of you more.

More often than not, I want to spend the night with you instead of taking the train home. Alone. I know if you knew I was here right now you would not stand for it. No way would you have let me ride the train this late by myself. But since you left, what choice do I have?

The pattern of writing you every night has started again. This is letter number 4 this week. I know what's happening or at least I think I do: I want to fill the void you left open. No man has been able to do that yet. I want you to do it yourself but I fear you will trick me, begin to fill my emptiness with your air and then burst my bubble with an unpredictable yet foreseen needle of deceit. You'll be honest about it though. Always honest. That helps you sleep at night. I guess.

The A is finally pulling up.

"Put your feet down."

I put my feet down. He looked to his right and started banging on the seat to get the attention of the guy across from me.

"Feet down!" He yelled so the guy could hear him over his headphones.

"What?!" Confused, the young Black man, in classic Adidas sweats and a pair of silver foams, removed his left headphone from his ear.

"Put your feet down!"

He put his feet down.

Satisfied, the pale-faced officer left the train car, while his partner entered through a different door. Red head. Stereotypically, he looked Irish.

The red head turned, leaving the train-car but right before he stepped all the way out, the man in front of me yelled, "BULLSH'T!"

"What?!" The first white officer turned his whole body, leaned his ear toward us, and re-entered to ask the man what he said.

"I said that's bullsh't. Why can't they put their feet up?" He was respectful, discounting the use of profanity.

The officers both looked crazy-afraid. They were outnumbered by strangers who would become a family fighting together if forced to face-off against their kind. There were about 14 of us and only 2 of them, yet, they didn't back down.

"You want to sit on the same seat that someone puts their feet on?!" Was the pudgy officer's rebuttal.

"Who cares?! Let 'em rest." The Black biker was sticking to his sentiments. His jeans were tighter than mine but his legs were built. He kept them crossed, right over left. His left foot rested on his bike's pedal. A washed-out, cashew colored rag was tied around his matted fro. His eyes were veiled behind a clean pair of Ray Ban aviators. A dingy blue snap back that read "I love Jesus" hung from his belt loop. Bracelets and rings adorned both hands and arms. Reminiscent of Micheal Jackson's "Bad" video.

"You want to step outside and say that?!"

"No, I'm not stepping outside for sh't! Thank you! Have a nice day officer!" He waved his hand, dismissing him and his silent partner, and without a second thought, went right back to his phone.

"Okay then, next time keep your monkey mouth shut and let me do my damn job!"

The train doors closed. I put my feet back up.