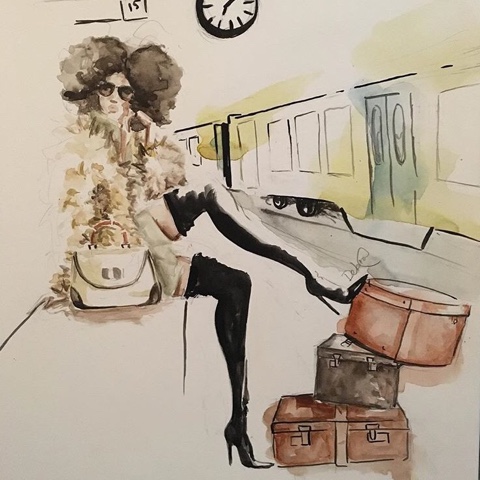 It wasn't pouring but it was raining enough to not be standing on a rooftop in heels and cocktail dresses. Yet, on the roof of a fancy hotel in midtown Manhattan, with a view of the Empire State Building, we stood, letting the light drops slide down our legs, ignoring the winds, sharing laughs and deep-hearted, long-gazed eye contact as we listened to each other's stories.

When a woman turns thirty, she tends to reminisce more than she did at any other birthday party. Instances when she was 5 and her dad told her that she could fly and she tried and she fell off the swing but never stopped trying because she believed her beloved and he never stopped believing in her. Or when she was 19 and her boyfriend cheated on her and she lost her mind and self-esteem, only to realize she never lost it because she never actually had it and had to go through that situation to find the true meaning of self-esteem, love, and care. Or at 27 when she began teaching at an inner-city school in Harlem, where all of the children looked the same and she stood out. How she grappled with learning to not generalize them or pity them or belittle their parents. How she learned to assert herself in situations where she used to be too nervous.

"I was totally afraid of her. So I never went to her for help." My eyes remained locked with hers, as she spoke of a black woman in an authoritative position at our school. Isabel was from Wyoming. She started out with Teach for America and decided to remain in education even after her two year term was complete. I never had a long conversation with her before today, even though we worked together for an entire year. She's leaving our school to teach in the Bronx next year, so today's talk will probably be the first and the last.

"That's a shame." Was what I said but 'not a surprise' was what I thought. I could imagine many other white female teachers saying the same thing about that administrator. She had a reputation for being one-sided and unapproachable.

"It's because she does that 'black-girl-intimidation' thing. It used to scare me too, until I realized I had nothing to be afraid of!" The birthday girl, Lia, who I'd grown quite close to this year chimed in. A fly white special educator, born and bred in Brooklyn, who battled with enough anxiety to make her the perfect match of empathy and understanding for our population of kids. She was known to always say how she felt but in most thought provoking ways. I learned a lot from her this year. However, I never heard her use the term, "black-girl-intimidation."

Here I was, on the roof, in the rain, privy to a conversation between two white women about a black woman they feared. Was I supposed to be hearing this? I remained stoic. Not wanting to address the "black-girl-intimidation" statement, not because I didn't know how to, but because I wanted to hear more of their perspective. This was rare. I would stay silent, letting them forget I was there. At least I thought I would.

"Ask V! V, remember when she tried it with you?"

Before I could stop her, Lia reeled me in, bating me into a net that I could only escape by teaching my way out.

"She damn sure did, but I killed that sh't. But I didn't give her attitude, I told her that I look up to her as a big sister and admire the work she does in her leadership role. I told her that her level of disrespect caught me by surprise because I expect her to be a model for me, nothing less. After that, she never came at me sideways again."

"Wow, Clay!" Isabel shook her head in dis else before  taking a sip of her martini.

She grew quiet, retreating to her thoughts, probably thinking about how different my approach was from what she was expecting. Maybe she thought I would give the woman a showdown of black-girl-attitude for black-girl-attitude. That is exactly what I wanted her to know not to do! It's hard when we, as women, are in positions of power - no matter what ethnicity, race, or sexual preference. I didn't want to teach her that the solution to her issue was shade, knowing that what she needed, what we all needed this past school year, was light.

"I'm going to try that next time."

"It's just love. Kill everything with love. Carry it with you every where you go and don't be afraid to use it. Especially when you are intimidated by someone. Just know, it doesn't work if it's fake love. It has to be from a real place. That's the only way the other person will actually be able to receive and internalize it. Trust me, even if they don't change, they are internalizing. Some seeds need more time to show their growth."

"That's why I love V! You see?!" Lia grasped Isabel's shoulder, adding emphasis to her excitement.

It's about 12:45PM now and I am sitting in front of my bookcase in my reading room in Washington Heights, heavily reflecting on their notion of black-girl-intimidation. I didn't think this was something I needed to address with my white girlfriends last night but maybe I should have. Or maybe it should only be discussed with other black women. Or maybe this is something I need to begin with by looking within myself.

From my own experiences, I can say that sometimes, we are considered intimidating by people who project their lack of confidence on us. We get deemed aggressive when we have to make power moves and decisions that others aren't quiet comfortable with. This is not all our fault and it is a major stigma of what it is to be a woman of color in a leadership role. Leadership, meaning anyone from single mothers to the First Lady of the United States. But when this stereotype prevents others from finding us  approachable, are we supposed to check with those that are afraid of us or check ourselves? In this case, both of the white women who found our administrator too intimidating are leaving our school. So, she, like many of us, will never know that we are feared instead of respected by our co-workers. How do we address an issues that isn't presented to us?

Maybe we don't address it head on, but what I do believe we can begin to do is take the proactive steps  of making it more verbally known that we are easy to communicate with. This looks different, depending on who you are and who you are dealing with. For example, I have a friend in the same position as my administrator and she has the same population of white female teachers as my school does. She begins her year with two types of off-line conversations to make people feel comfortable with her: a 1 to 1 open-letter journal that they pass back and forth throughout the year and 1 to 1 black-tea-talks off campus. She finds that her more introverted teachers prefer the journal while her other teachers love to go to a coffee shop and just vent. Now, I'm not saying we must do a bunch of unnecessary people pleasing, nor am I saying we must cater to anyone, what I am saying is, we have the power to kill the stereotype that has been put into people's minds as a result of their experiences with other women of color (in media or in person) before they can create the same untrue narrative about us. It's not about making people feel comfortable with us or changing who we are as individuals, it's about making the work environment a safe space for people to be honest and open with us when they need our support. These broken lines of communication will not help us to grow as women in leadership. And if it's taking place in a school, it will also be a great detriment to the betterment of the students.

Of course, there will always be those that will remain afraid to say what they truly feel to our faces, no matter how much comfort we provide them. Again, this is not about ensuring comfort for all, this is about taking steps to altering a very common misconception of us as women of color and women in leadership as a whole. All we can do is our part to support each other while debunking the myths.