Questions Children of Color are Asking: Am I the Next Hashtag?

July 11, 2016
"Shaming has been a central component of racial assault, yet it is also central to all other dehumanizing practices."
bell hooks. 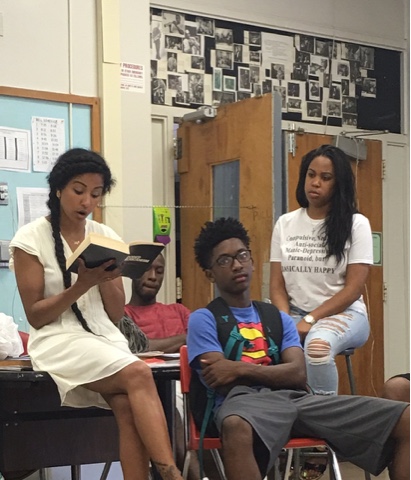 Consciously working to instill high self-esteem and self-actualization in children of color is paramount to any other form of activism in my life. As adults, we can protest, post Facebook statuses, boycott big-chain stores but what about the children? We must not neglect their voice during this time, instead, it is our responsibility to guide them on the primacy of self-developing their own opinions.


As a woman who has dedicated her life to service through teaching social justice issues, seeing such egregious abuses of power made me feel numb for a night. No words. No emotions. Just numb to the pain that I usually feel when hearing the jarring screams of children, like the son of Alton Sterling, expressing his agony for the loss of his father. I couldn't move. I did not cry. I fell asleep, only to wake before the sun rose and write lesson plans. Being that I am out of school until August, I decided to reach out to friends who are working with the youth this summer. I was openly welcomed by Troy Millings and Shanel Taylor, who run a program for teens in White Plains, NY, called Crossroads. I asked them if I may facilitate a few reading and writing workshops around coping with the trauma that our youth may find themselves experiencing after seeing death, after death, after death. These YouTube videos are not mere movies; these are real people with real families. The young minds that are watching these videos are denigrated, in more ways than one after being exposed to the rawness of it all. 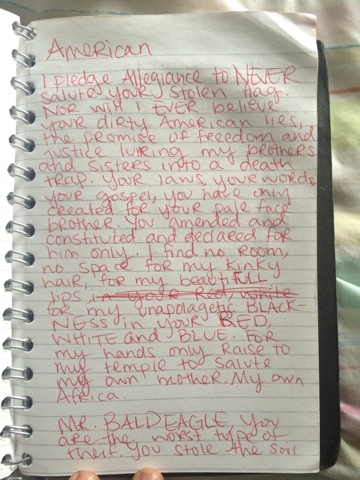 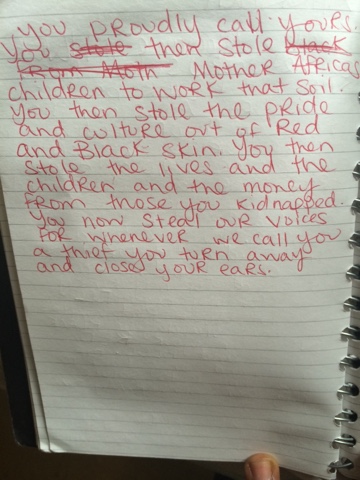 I've been on my summer self-care momentum. Out of touch with the world beyond my room of books. I didn't even know about Alton until one of my students, Scott, called me to read his poetic prose of outrage and hate for the police that he wrote in response to the murder. I didn't know about Philando until another one of my students, Aicha, called me, in tears, and asked could she read what she wrote about all of this (the free-write in the pictures above). Both of their writing pieces were filled with an explosive misplaced frustration that I know is only being fueled by the messages in media and social networks. As a result, I found it vital to teach the students how to view images, articles, and statuses of everyday citizens with a critical eye.

This nuisance affect of these killings can only be combated through the knowledge of our history. The students raised disheartening questions like, "Should I live in fear?" "Am I the next hashtagged name?" "Should we hate all white police?" "Are white people afraid of us? Is that why he killed him?" These questions came directly from what they analyzed in those YouTube videos. "Why was he still holding the gun on Philando after he was already lying there about to die? He was afraid, right? Even though he's supposed to be trained as a cop? Do you think he's afraid of black men?" Then there were honest emotions being shared."I don't think I am safe in my neighborhood. I can get shot any day by a cop or by a regular person. People have more power than me because they have guns. That scares me."

Before I could move on to anything else in my lesson, I had to address self-love and provide an understanding that we are not helpless and hopeless but we are actually stronger now than we have ever been. What makes us strong is the ability to love, unconditionally. I explained that we cannot generalize all police officers or all white people, in the same way that we do not want them to generalize us as people of color. "When you generalize, you put people in a box. If we stay in our box and they stay in their box, will we ever be able to see one another?" I asked. They understood. They said, "No."

"When extreme racism could have made life unbearable for black folks, communities sustained themselves through a process like consciousness-raising." -bell hooks. I used this quote and another by Erykah Badu, "Human beings do not scare me, it's the robots that I am afraid of." The students analyzed these quotes and realized that I was leading them to a place where they would be encouraged to think for themselves. I then taught them about having a growth mindset, differentiating between subjective v. objective accounts of a story, and recognizing hidden bias and motives in media. I provided them with five different texts which varied from "Hooded Americanism" about the role of the Ku Klux Klan in the politics and the "Pedagogy of the Oppressed" chapter three, which explains how exchanging love and dialogue is the only way to move onward and upward from the struggle.

Teaching is much like gardening. Though I planted seeds today, I may not see the fruition in them tomorrow. But this is not the type of change that will last if it were to occur over night.

If we fail to educate, enlighten, and encourage our youth during these times, we are doomed. When I came up with these lesson plans, I could not wait to go back to school in the fall to use them, I went back to my own community and gave those students a hope that transcended back on to me. They are the next up, they need this guidance and exposure more than any of us need anything else.

We have to teach the wisdom and power of forgiveness, love, and light. Martin Luther King was on to something. That's one of the reasons why he is no longer with us. He was killed before the message of nonviolence could be fully understood by our community, this caused us to move away from it. As soon as Malcolm X was on that same love and light wave, he was killed too - not when he was at the height of his career as an activist, they got him when he was truly trying to enact real change.

We have to pick up where they left off and perpetuate light, not ignorance. That's why I taught the children to identify ignorance. They need to know what they are looking at because they look at it every single day.

If we aren't making sure we teach our youth, they will be sure to carry the narrow-minded perspectives that are being spewed about on social media. I cannot allow that. This is why I teach. 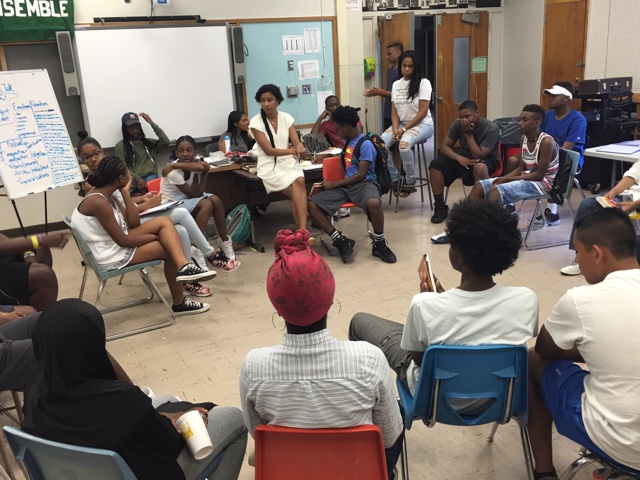