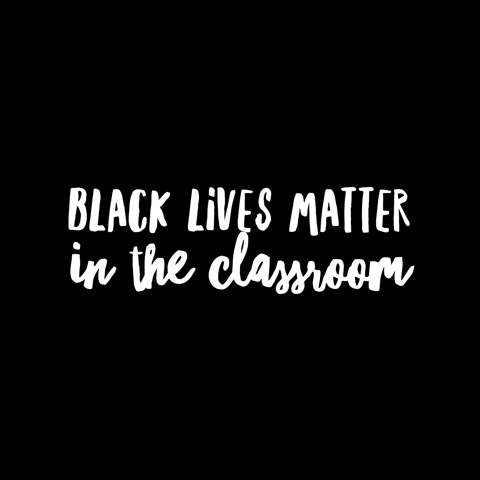 Here's what happened when I facilitated a discussion about the abuse of police power with a group of 8th graders in Harlem, New York on the same day the video of Terrance Crutcher's death was released.

1. First we watched the video. Depending on the grade level, this video and any other videos of someone being executed should not be shown to students without parent permission. Honestly, I don't even know if showing it to 8th graders is the most appropriate move but the video I chose was less about the shooting and more about the commentary.
Click the photo to see the video we watched. 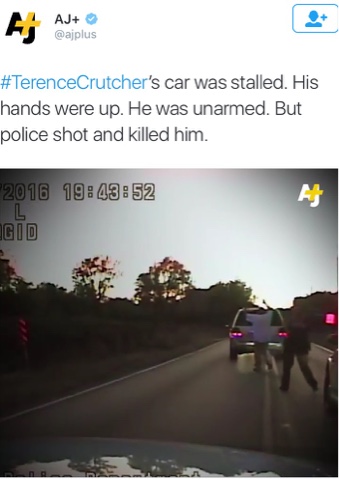 2. I set a serious tone when students moved to the meeting area, where the video was shown. Told students what we were about to watch was not to be taken lightly. They may not talk, write, or leave the classroom during the video.

3. After the video was shown, students returned to their seats to write their reactions. I used page "Am I Wrong for My Feelings" from Soundless Cries Don't Lead to Healing: A Critical Thinking Guide to Cultural Consciousness. The sentence starters (I am angry about... I am annoyed by... I blame... I am defensive about...) on that page allowed for a safe and private space in which each student could be vulnerable and honest about their true feelings, without being judged.
*Note: It is not recommended to start the dialogue with the class before having them complete a written reflection.
With writing, the facilitator can gauge every student's emotional state, not just the ones who speak up during the dialogue. Additionally, writing their thoughts before the dialogue usually proves to make the dialogue much more powerful because students who would normally remain quiet share their thoughts as a result of being comfortable, since they already processed their emotions before sharing. 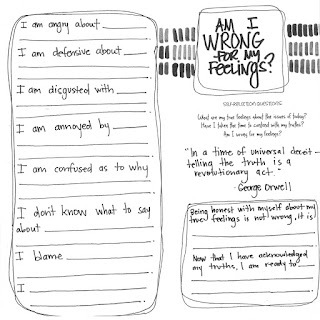 4. We started a Spirit-Read activity to share our thoughts. During the spirit-read, each student shared something that was connected to the person's statement before their's. Some of the heaviest, most heartfelt responses were shared by students who hardly ever said a word in class before.

*Note: This is not the type of lesson an effective facilitator can fully-plan for in advance. It is important to go into this with an open ear for teachable moments that may be expanded on.


As they shared, I took mental notes on what I would need to address after the Spirit-Read. After listening to the students, I realized, their most pertinent issue was
making generalized statements such as:

"White cops always go for black people."
"Cops barely even target the white people."
"Mostly all cops are racist."
"Instead of keeping us safe, they just killing us."
"This is standard for cops. They are racist and just targeting black people."
"Some are doing the right thing but the other half are making it unsafe for us."
"They are keeping the white race safe but not keeping us safe because they keep on shooting us."

Their feelings of frustration, anger, and disappointment are very valid. But as their teacher, I cannot let them grow up like many of us, who were taught that just being angry is enough. It is not enough. We must teach our children to think beyond their emotions, much like Dr. Martin Luther King. We can't live in our anger and expect to see a difference. I made sure to address this with them by using examples they could relate to. Watch the video above on Debunking Generalizations to gain full understanding.
Sure, I have my own feelings and agree with some of these statements at times, but the reality is, generalized statements are only going to keep us away from our goal of achieving change.
As educators, we must remain mindful of how influential we are in the eyes of our students and how impressionable they are as adolescence. This is why it is so important that we separate our beliefs when we facilitate these kinds of discussions. We have to do the work of straying from subjective opinions by teaching them to view these traumatic events from a broadened perspective and with a critical eye; not to subscribe to someone else's ideas on the state of our race in this nation. Train them to think above and beyond the issue. If they do this now, the practice of it will surely impact our world when they are adults in the future.
Look at your students as young activists. The next president is in your classroom. Future policy makers and police officers. Plant seeds that will manifest into the change that our world needs. 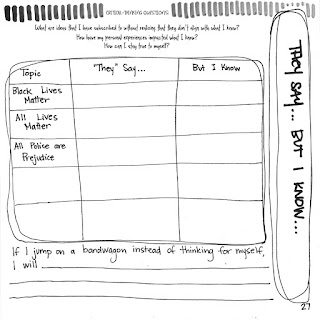 5. Once I cleared up their misconceptions, I had them go back to thinking independently through the "They Say... but I Know..." page in Soundless Cries Don't Lead to Healing. This page was perfect because the "They Say..." column was natural for them to fill with the everyday opinions of their peers, family members, and others on social media. After the talk we had about debunking generalizations, they were able to fill out "But I Know..." with their own personal truths.

Teacher Take-Aways:
Optional Follow Up Lesson
Guiding Questions:
This is just a reflection of a single lesson on current issues. If you still need ideas about how to incorporate social justice plans with your own students, please email me Valencia.D.Clay@gmail.com.

Leave comments below to share your tools and methods for addressing black matters in your classroom.