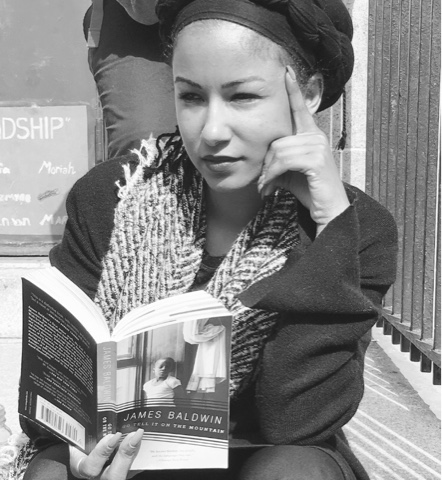 She was talking for the whole waiting room to hear:

"I'm ty'd a dis bullshit, honey. I don't drink. I don't get high. But they wan' keep sendin' my ass down here to get a gotdamn drug test. This sh't some sh't."

All the men in the room agreed, though she wasn't talking to them. My school district sent me to the clinic for a TB shot, not a drug test but I agreed as well: it was some bs that she and the other city employees had to spend their day in there. Failing a drug test is just another cloaked form of structural oppression. Big corporate tycoons get higher than an average Baltimore fiend but they never get tested, meanwhile, blue collar workers will lose everything if they get caught with even a drop of THC in their system.

Seeming to all be familiar, men dapping one another saying, "I'm ready get my CDLs and be through with this sh't!" And the others repling with congratulatory praise.

I walked out after my shot to wait for my uber. I overheard a young father on the phone with his daughter.

"I'm not gon' keep comin' up that school. Lil' ass bet' act like you got some mafu'kkin sense. These teacher's ain't lying on you. You playin' I'm ty'd a comin' up that school, yo! You think this sh't cute!" His voice went from a sullen gray monotone to a red pitched screech of unyielding frustration. The whole conversation reminded me of one I had yesterday...

As soon as I walked into my school on Monday, one of the teachers told me a young parent, known for her short temper and belligerence, was looking for me. It was said like I had stolen something from her or owed her some money. Mentally, I was prepared. I'd been meaning to call her for a few days now.

She saw me from the main office window. I tried to give her the wait one minute signal with my index finger but she came right through that door, totally disregarding my nonverbal gesture.

"Good morning. How you feeling?" I smiled but kept my tone stoic. She was rather hyped for it to be so early in the morning. I needed to remain low to balance the energy between us.

"I'm ard... But we need to talk about my son. These teachers in here ain't doin' thangs right, Ms. Clay." in her heavy Baltimore accent.

"Come on, let's go to my room." I held the door for her as I realized, this was not about my interactions with her son, but with his interactions with other teachers in the building. She was coming to me as an ally. I wondered, why me and not our school's administrators? Was it because I taught her eldest son for three years before having his younger brother? Was it because I am black, like her?

"Ms. Clay," she paused on the steps as we went up to the middle grades floor. "Now, you know him just as well as I know him, he ain't gon' just tell no lies. He got his ways but he ain't no liar."

"Well, what happened? Someone hurt him?"

"These teachers don't know how to talk to him. It ain't but two or three people in this school that know how to deal with him and she ain't one of them." I let her say that but I knew it wasn't entirely true, I had my stressful days with him just like any other adult in the building.

"One of the teachers did something to him?"

"Wait, what?" I began to feel ashamed of myself.

"Look, let me show you this text..." She pulled out her phone and showed me a text that read: You got to come up the school right now!! She cursing at us and I'm ready get put out! "Now, you know he ain't just gon' make no sh't like this up! You don't curse at no kids! They not your child! That sh't unprofessional, ain't it, Ms. Clay?"

In the time between my long-held inhale and my nervous as hell exhale, I was transported to autumn in Harlem, earlier this school year, when I lost my cool with one of my students. He had been agitating my soul all year. Both of his parents came in, almost everyday, to no avail.

It was after a long, 9 hour day, school was about to let out. We were on opposite sides of the hallway and even though I just met with his mom and dad earlier that morning, he still fixed his mouth to blurt something rude to me, like he always did every time he saw me. I was sick of it. I scowled at him but he kept going. Finally, when I got to my classroom door, I turned around, smiled as hard as I could and impulsively flipped him the bird, fast enough to make his jaw drop to his shins. His face was priceless, he kept rubbing his eyes, as if they were deceiving him. I let out the most gratifying laugh of revenge.

Immediately after, he snitched! Telling everyone what I did but because of my reputation of being loving and his reputation of being a liar, no one believed him. I could have gotten away with it, scotch free! But I know how it feels to be a powerless child that nobody believes. So, I admitted it, shocking everyone except for my principal who laughed and said he wished more of his teachers were that "gully" and that I shouldn't stress about it because he'd done far "worse to that boy." Speaks volumes about the culture of our school but that did not make it feel any less shameful for me after telling the truth to my colleagues and his parents.

Here I am always teaching other teachers about love-based discipline and I was guilty of cursing at a boy who needed nothing more than consistent positive attention and care. How could I ever speak on how to discipline our kids again?

Ironically, after all of that, he understood why it happened. The next day, he handed me a letter, apologizing for pushing me to that point. I forgave him, as he forgave me, and capitalized on the opportunity to talk to my whole class about mental triggers: They are real and no matter how old or young a person is, everyone has them. 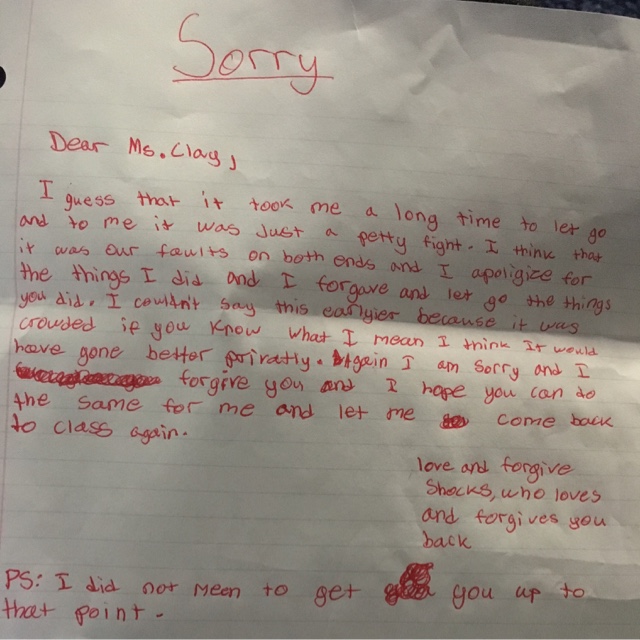 That situation actually brought the two of us closer. We came up with a proactive plan that consisted of code words, a secret handshake, and colored sticky notes that we would use to communicate when one of us was approaching the danger zone.

But what was I supposed to say to this parent all these months later? Yes, cursing at the kids is wrong but I can completely identify with the teacher, too. I didn't want to be biased. But at the same time, I know her son and how unruly he can sometimes influence the class to be. He's a leader who knows not his potential or power. The best teachers run out of their capacity to be level headed with him.

"Yes." I finally responded. "It is wrong. It is absolutely unprofessional. But I understand both sides. I'm not justifying her actions but that class is hard to deal with, especially if you're a new teacher who is not as relatable to them as their other teachers. They act wild in that class sometimes. And he, I know for a fact, is a ring leader of disrespect. Some of the things he was saying to adults in this building last week, alone, had me shocked. I couldn't believe the things that were coming out of his mouth. I'm sure she was completely fed up to the point where she just flipped on them."

"She should have walked out! She lucky I came up here looking for you because if I was in one of my moods, I would've came up here and hauled off on her ass. Knocked her right in her mufu'kkin mouf!"

"I know that. And he knows it too. This is why he's been acting like this lately. He knows you about that life. He knows you will fight anybody in these streets for him. So, he keeps using this against his teachers. I respect the fact that you have his back at all times. It was times when my teachers lied on me and my grandmother believed them over me. So, I commend and respect parents like you, but I need you to know, he is taking advantage of your protectiveness. And it's going to hurt him and you all as a family, in the long run, if he keeps this up. He won't learn how to be a man if he knows he can get away with anything, as long as you always believe him - even when he's being totally truthful. You know what I'm saying? That's how our men end up in jail..."

I wasn't sure how she was going to take that but I knew it was my duty as a teacher, that she respects and listens to, to be 100% real with her. I once heard a colleague of mine say, "We, as black educators, have more responsibility when it comes to parents because they won't hear certain things a white teacher would say, that we can say." In this instance, she may have been right.

In addition to the responsibility to tell parents the truth, we have an even greater responsibility to be honest with ourselves when we are reaching the end of our patience. Responding to students with profanity or abuse is a clear indication that there is a lack of self-care on our parts. With all of the demands it takes to be an urban educator today, we barely even have time for ourselves but we must find a daily outlet. We must prioritize our sanity first. We have to set specific moments to recharge and treat that time like its sacred.

There are many children and even adults who are said to "respond better"  to negativity, yelling, and extreme sternness but that is a learned behavior. As a teacher, I understand how mistakes driven by frustration may occur, but it's certainly not acceptable to say, "That's the only thing they listen to." Saying such perpetuates the school to prison pipeline.

"I know what you mean, Ms. Clay." She agreed with me. "I just don't want nobody cursing at my child. If he doing something wrong, then call me. Let me get his ass. But I do understand she having a hard time with them."

"Right, teachers are as human as the kids. That's not an excuse but it's the truth."

We walked downstairs to see him in the cafeteria. As soon as he saw us together, he revealed a sinister smile and yelled, "What you tell her, Ms. Clay?!"

"Ma..." He carried the syllable. "She keep on bothering me, I'm ready stab her with this fork!" He was pointing a plastic spork at a little girl with 4 ponytails, adorned with big white bo-bo's. "Here, Ma! Stab her! I can't hit no girl!"

"Boyyy!" She was annoyed with his over-playfulness. I was bewildered by him suggesting that she stab someone for him.

"Shut up and stay over there with your friends! Stop showing off before I stab you!"