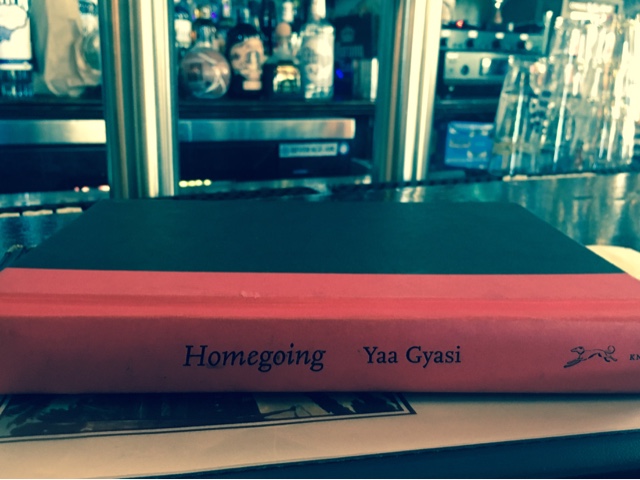 I was in my mid-twenties when an African preacher called all of the single women to the alter and prayed for us. He poured half a bottle of holy oil on my head, ruining my fresh blow out.

"You all will be married by the end of this year." I looked back at my aunt who was screaming, "YES GOD!" Receiving the words and believing them for the both of us.

I knew when I turned down Dekalb, there was a reason. I'd missed my turn by two blocks. Even with Google maps, Brooklyn always loses me.

I walked, admiring the wide terraces that loomed above my head. These weren't brownstones with stoops, they were newly renovated two family homes. I wondered who lived in each building. One had a conservatory feel, with unfinished logs for benches, in the style of an urban outfitters picture or a swanky air bnb...

My steps began to feel off beat, I was no longer in sync with my own rhythm. There was a drum near, calling my legs. Tambourines that reminded me of Sundays in North Carolina, as a youth. And finally a lead singer in a choir, screaming to save the souls in the yellow brick church house. I couldn't see any of it. My ears were doing all of the work. When I got to the doors, I stood with my head cupped, listening to her wailing words.

"I couldn't do it all by myself!" She sang with hunger. "When I think of the goodness of Jesus and all that he's done for me!!!"

I smiled as I thought of my aunts, who brought me up on those songs. Those songs that got me through when I still believed.

I thought of walking in, just to listen a little more .. But I decided to keep going, I had a train to catch.

I felt myself smiling under the sun and walked a little faster, much faster than the elder black grandfather and two young boys ahead of me. The grandfather heard my heels against the cement and without even turning around to see how far I was, without allowing me to say "Excuse me", he grabbed the littlest boy's shoulder and pulled him in to his leg, making room for me to pass them.

But I was still close enough to hear the taller boy ask, "Is Jesus and God the same thing?"

I turned around and looked them all in their eyes, smiling at his question, as if he were asking me, as if he were a student in my class. Maintaining my pace, I listened to his father respond.

"God is God. It ain't only but one God. God made everything and God own everything. We don't even own ourselves, God is in control. That's why we got to be grateful for everything we get. God is good to us."

I didn't hear him say anything about Jesus, which made me wonder what the boy's next question would be, but as I turned on Broadway, they lagged too far behind for me to find out.

I remember asking the same questions as a child. Are God and Jesus the same? I was taught that God is the father and Jesus is his only son. Which confused me because I was also taught that everyone in the world are God's children. So is Jesus my brother? Then there were songs that said, "You have a friend in Jesus..." So Jesus is my friend? But I must call on him for God to forgive me for doing bad things? And if I don't believe in the story of Jesus, than I can't get forgiven? I will go to Hell. Because God only forgives and let's Heaven be a place for those that believe? I had so many questions but I never asked them. I just believed. Because it was a sin not to believe.

Palm Sunday today. I remember getting the palms after church and hanging them in my room for months... but more than that, I remember getting outfits for Palm Sunday and Easter. I remember how important it was to wear something brand new. How much of a fashion show church was on these Sunday's and how much I cried and felt ugly on those occasions when my grand mother couldn't afford to get me anything new for Easter. Why was this so important?

Is organized religion a surefire way of ensuring mass consumerism? It would be blasphemy to ask if, I was still a believer.

My grandmother never believed in paying too much money to the church. "I'm not giving them n'ggas all my damn hard earned money." My aunt, on the other hand, would pay her tithes faithfully. I remember tithing testimonials being told by single mothers in church. I remember love offerings for people in need or guest pastors. I remember people placing money on the alter when something the preacher said resonated with them. I remember watching the trustees count the money in the choir room.

I remember prophesies over my life and other children around me. Sometimes they came true. Is it because I believed? The prophet laid hands on my forehead, he may or may not have put some of the holy olive oil on me ... I remember him laying me down on the floor of the church and then an usher covering me in a white sheet. He told me that I would travel the world. I was a child, then. I've been to 5 continents since.

I'm sitting at a bar now, reading and waiting for a couple of my friends for brunch. I can't remember the last time I went to church but I know that I have never been more aligned with Spirit in my life. Actually, no, I take that back. I have always been aligned, it's just now, I am much more aware of it than I have ever been.

I believe in God, still but not in the other traditional rituals that come with Christianity. I don't believe I have to pray for forgiveness to something outside of myself. When I am wrong, I need to forgive myself. If I wronged someone else, I need to ask them for forgiveness. Simple.
Christianity helped me to build a high moral character. I am a "good" person because of wanting to please this God that I was taught to fear. I didn't want to be a sinner. I didn't want to be bad and go to hell. But being a traveler, a reader, and revisiting my same questions that I had when I was a kid opened my eyes.

So when I think of the goodness of Jesus, I now think of how the story has many themes. So many that may be applied to various circumstances in our lives. This is my regard to the entire Bible. I can apply the poems and the people's stories to my life. But I don't believe that not following each rule of the Bible will send me to Hell. I don't believe I need salvation and deliverance from my "sins"... I believe in recognizing my areas of growth and working on them. I believe in the Voice that lives within. I believe in God, that God is love and everyone is God and God is everything --- and we can all use our God-power if we allow ourselves to ask questions and find answers.