May 21, 2017
Maybe about 15 minutes went by when a couple of women who lived in the neighborhood ran over to G and I, screaming, "DEY OUT HERE FIGHTIN..." 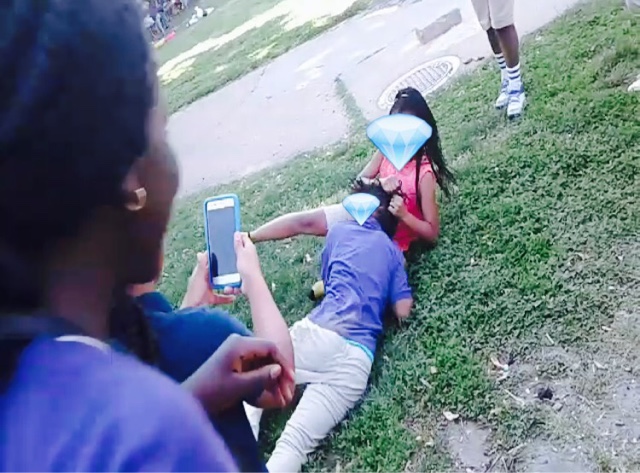 It was so hot Friday morning. Wasn't even 9AM yet. Nice enough to take my girls outside but too hot to sit anywhere but under the shade. We did a quick initiative, shared our highs of the week. Shortly after, I told them to be free and enjoy the park. Most of them ran off together, a few of the introverts moseyed over to the broken swing set.

From my bench, I could see most of the girls and trusted that they would play and talk and chill, thinking that's what 5th grade girls do with their free time, whether they are inside or out.

Maybe about 15 minutes went by when a couple of women who lived in the neighborhood ran over to G and I, screaming, "DEY OUT HERE FIGHTIN' AND YALL TEACHERS [heavy emphasis on teachers] AINT EEM WATCHIN' DEM!" By the time we looked up, all the girls were running from the middle of the park where I couldn't see them, to the broken swing set. It looked like an innocent game of tag. I was hoping it was.

"No!! No, Ms. Clay!! We was just playing!!" I wanted to believe them. I wanted those women to be wrong about what my girls were doing in the park. They're so little, so cute. Yes, they have drama but they don't fight.

"Wait, you got it on video?" I took one of their phones before she could say anything. Pressed play and watched a video that looked like those nasty ones that goes viral on World Star Hip Hop. Playing? They were defiantly NOT playing. Two girls were on top of each other like lions. Pulling hair, throwing deep punches, slamming one another on the cement parts of the playground. Even after they were broken up, their fists found their way back to each other's bodies. Playing?

This is the kind of game 11 year olds play now? Where was I? What was I doing sitting under the shade while two girls were killing each other? What was I doing while their friends, other 11 year old girls, were cheering it all on. At least 5 of them recorded it on their phones. You can see and hear them saying, "Bang her!!!" and "Get up!!! Don't let her win!" You can feel your own scalp burning as they yank at the roots of each other's locs and marley twists. Natural hair, baby hands, pre-pubescent bodies playing a game of "Let's fight!"

I told them I was utterly disgusted with them. The fight, the lie they told about it being just a play fight, the girls who recorded instead of breaking it up, the girls who cheered like an audience in the coliseum. But what I didn't say was how mad at myself I was for not seeing this. I trusted them to play like little girls play, instead, they brought me back to the reality that our children need more supervision now, than ever before.

I can't go back on Monday in the same way I left them on Friday. I most definitely can't just let them think this over, I have to teach them. I have to teach them about prison culture and how quickly they could land in jail for what I saw on that video. I need them to know the brutal history of girls fighting for entertainment. I need to make them build a sisterhood, even from this experience. I have to be more intentional.

I fought my way through school, so I'm not naive to the fact that children as young as them have fights. After all, I had my first fight when I was only 8... 3rd grade. Back of the bus. But I never made it seem like a game, I never told a bold face about it. And the whole entire group of those girls, even girls who I never saw exhibit any foul behaviors before this day, lied about it, incessantly - which leads me to believe that maybe they really believed it was just a game. That's the part of all of this that bothers me the most.

It wasn't a game for me and not for the girls I was going against, either. By the time I got to 10th grade, I was carrying razors and knives to protect myself. I had no choice but to fight back, simply because, I didn't know of any other way. You can't just say, "I don't want to fight you." I mean you can, but I couldn't back then. I wasn't strong enough to, I thought being strong was fighting back. I was completely wrong and what I see in these little 5th grade girls is the exact same misconception that was inside of me and the girls I was fighting against. We grew up in a prison culture, even though we were not even behind bars.

This isn't apart of my curriculum but I have to make room for it. This was the second girl fight at my school this week. The first was on Tuesday when a couple of girls from another school came to jump one of my 7th grade girls. I can't let these girls end up locked up or worse, dead, because they weren't taught any better, especially now that summer is coming. I have to teach them: true strength lies in walking away. I read that there were 9 deaths this week in Baltimore, one being a 17 year old girl. 127 murders in total this year to date. We've lost too many children to violence in this city already. I can't just sit here. I have to show these girls the numbers, statistics, and truth about what happens to the vast majority of little girls who "play fight" in elementary and middle school. They don't all turn out okay, like me. I have to expose them to the reality of where their behavior can lead them. That's the part that World Star doesn't show at the end of those videos. Social media can't teach my students, that's my job.

***
Added 5.23.17
Dont get so caught up in what the oppressor is doing to us, that you ignore what we are doing to ourselves. Today, I taught my lesson about the school-to-prison pipeline and used Kendrick's line, "So why did I weep when Trayvon Martin was in the street when gang banging make me kill a n**** blacker than me?
Hypocrite!" and true stories about Black girls being abused by school police in Baltimore, to show them that they are doing exactly what we, as a community, are fighting against. We can't move forward and backwards at the same time.